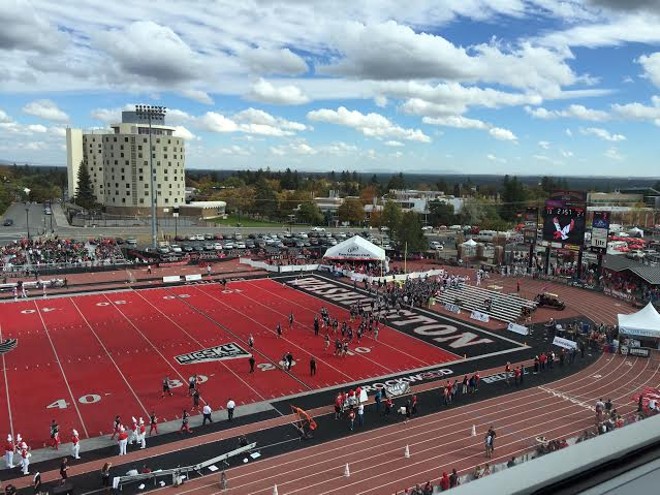 Max Carter
The Eagles and Mustangs head to the locker room at half-time
On a sunny Saturday that was supposed to belong to Cooper Kupp, the wind changed Eastern Washington Eagles head coach Beau Baldwin's game plan as the Cal Poly Mustangs visited the Eastern Washington Eagles at "The Inferno." Despite two weeks to prepare for the Mustangs' triple-option attack, the 122-ranked Eagles rush defense was no match for the top rushing offense in the nation.

After just one half, quarterback Chris Brown and the Mustangs amassed 298 yards on 44 rush attempts, en route to a 21-13 lead over the Eagles. Unbelievably, Cal Poly passed only ONE TIME in the first half for a three yard gain. But as the second half began, the question in everybody's mind was the same: Where is Cooper Kupp?

With the wind picking up to 20-25 mph as the second half began, it was becoming more and more clear that the rushing game would be what decided this contest. Amazingly, Cooper Kupp was hardly a factor, and it had nothing to do with the Cal Poly defense.

What everybody expected to be an offensive shootout had evolved into a ground-and-pound defensive scuffle. After complete domination by the Mustangs' rushing attack in the first half, the Eagles threw up two crucial defensive stops to open the second half, grabbing some momentum back from Cal Poly. It wasn't enough though, as Mustangs fullback Joe Protheroe hobbled into the end zone for his second score despite an ankle injury. And as the third quarter came to a close, the Eagles had the ball on the Mustangs' 26 yard line, facing a 15 point deficit.

A couple strong runs by Jabari Wilson later and the Eagles were in position to make it a one-score game. They did just that, as David West connected with Kendrick Bourne on an 8 yard pass to make it 28-20 Mustangs. Despite 421 rush yards from Cal Poly, Beau Baldwin and his team found themselves with a great chance at victory.

Those hopes were quickly dashed by a touchdown run from Chris Brown with 9:16 left in the fourth quarter, but the Eagles, who have won the Big Sky Conference three years in a row, would absolutely not go down without a fight. Jordan West and company responded, putting together an 85-yard scoring drive capped by the second touchdown run of the game for Jabari Wilson, making it 35-27 Mustangs.
click to enlarge 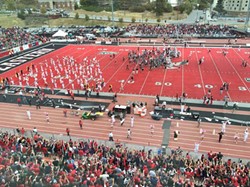 The Eagles then attempted an onside kick, which resulted in a controversial "illegal block" call, causing a re-kick. After a phenomenal stop by the Eagles defense, which played with heart all day long, West and his offense got the ball back for one final stand.

Given great field position by a terrible punt from Cal Poly, the Eagles offense showed everybody at Roos Field why they are the reigning Big Sky champions, driving 55 yards on seven plays to score on a 16-yard pass from West to Nic Sblendorio. Still down by two with 57 seconds left, the Eags had to go for the two-point conversion. The first attempt failed as the pass was incomplete to Kupp, but Eastern was gifted another chance as Kupp was held by the defense. The second attempt went to Terry Jackson II, who made the catch to bring the Eastern faithful to their feet. Tie game, 35-35.

After the Mustangs failed to score in the 57 seconds they had, the game went to overtime. Despite 491 rushing yards for Chris Brown, Joe Protheroe and the rest of the Mustangs ground attack, the Eagles had hope.

The Mustangs won the coin toss, but chose to differ possession to the Eagles, who wasted zero time, scoring on the first play of overtime. A 25-yard touchdown pass from West to Kendrick Bourne, who totaled 10 receptions for 84 yards and two touchdowns, gave the Eagles a 42-35 lead after the extra point. Somehow, the Eagles had taken the lead, and the defense was just one more stop away from an improbable victory.

To nobody's surprise, the Mustangs responded with the third rushing touchdown of the game from quarterback/running back Chris Brown, bringing it to 42-41 Eagles. Rather than attempt to tie it up and continue what had been an absolutely ridiculous game, Cal Poly chose to go for two and the win. The play was a classic triple option sweep to the outside, and as Brown pitched the ball to his running back, Eastern's defense closed in like a lion on the prowl.

The football squirted from the running back's hands, rolled towards the end zone, and just like that it hopped out of bounds. It was a bizarre yet perfect ending to the first overtime game for the Eagles since a triple-overtime match-up with, you guessed it, the Cal Poly Mustangs. Some way, somehow, Beau Baldwin and his football team came away with another win, improving to 3-2 on the season and 2-0 in the Big Sky conference. Final score: 42-41 EWU Eagles. I think it is safe to say that Cheney was rocking Saturday night.

Game Notes:
-Two-time All-American Cooper Kupp was targeted only five times, pulling in four receptions for 21 yards
-Eastern quarterback Jordan West finished 27 of 35 for 224 yards and four touchdowns
-Eagles running back Jabari Wilson carried the ball 25 times for 107 yards and a pair of touchdowns
-Cal Poly's No. 1-ranked rushing offense amassed a video game-like 503 yards on an absurd 89 total rushes
-Mustangs fullback Joe Protheroe, who was limping on and off the field for essentially the entire game, still managed 121 yards and two touchdowns on 30 carries 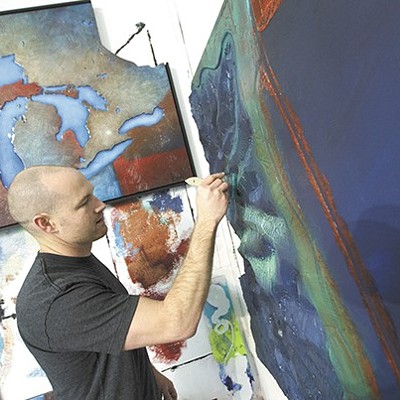