Centuries — 523 years, to be exact — after Columbus’ accidental arrival on the shores of North America, U.S. cities are beginning to question the celebration of such an event.

Columbus Day became a federally recognized U.S. holiday in 1937 as the Italian-American population pushed for it. Many false assumptions come with the holiday, however, including the notion that Columbus was the first person to discover the Americas, which completely disregarded that the indigenous populations already present had discovered the Americas about 14,000 years prior. 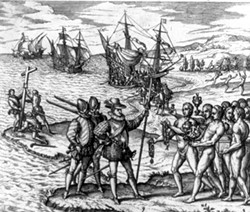 The original idea of celebrating Indigenous People's Day instead of Columbus day first arose in 1977. Activists and indigenous populations alike were outraged over the celebration of a man responsible for the truly barbaric enslavement and death of what some historians say were entire populations of indigenous tribes he encountered.

How do celebrations of Columbus Day measure up around the country?

As of last year, 16 states, including Alaska, Hawaii, South Dakota, and Oregon, do not celebrate Columbus Day at all. South Dakota instead celebrates Native American Day, and Hawaii celebrates their Polynesian ancestors with Discoverers’ Day.

In 1992, Berkeley, California, kicked off the modern initiative to change Columbus Day to Indigenous People's Day. Other cities followed, albeit slowly. The social movement is gaining traction, too. In the past few months, several others have decided to toss out Columbus Day, including:

Since Columbus Day remains a federally recognized holiday, many may be wondering: Do I have to go to work or school? While the answer years ago might have been an overwhelming "no," times have changed since the 2008 recession, when business couldn't afford to pay workers for a day off. Now, only 14 percent of government organizations are expected be closed this year on Columbus Day. Some holiday, right? The overwhelming majority of people will be at work or school on Monday, including Spokane Public Schools' students, which does not observe the holiday by taking the day off.

As for the City of Spokane, there are no plans to debate the notion of Indigenous People's Day vs. Columbus Day at tonight’s city council meeting, according to City Council President Ben Stuckart.