The sports weekend sure started off great for football fans across the Inland Northwest. If college football was the only thing we thought about, we'd still be sky-high after the wacky overtime thrillers in Cheney and Eugene on Saturday.

But then, of course, Sunday NFL action happened. Uggh. More on that in a minute — let's start with the positives...

COUGS DON'T EVEN COME CLOSE TO COUGING IT 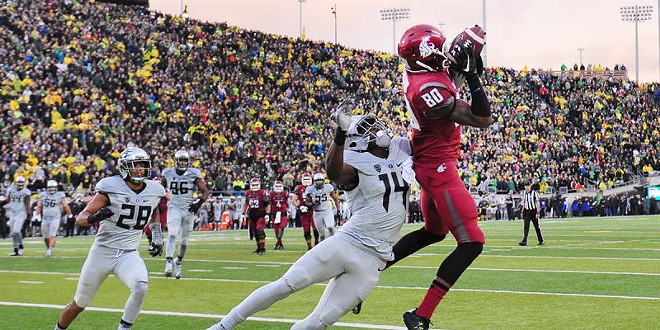 Washington State athletics
A TD pass to Dom Williams on the final play of regulation propelled WSU to overtime and a victory against Oregon Saturday.
Okay, they came a little close, but Washington State came up with a signature win at Oregon on Saturday that maybe — just maybe — can propel them to a bowl game this year.

The lowdown: WSU, led by quarterback Luke Falk and his insane 50 completions in 74 attempts, led for big chunks of the rainy Saturday afternoon game, then found themselves behind and scrambling for a last-second TD that put the game into overtime. Once there, they outlasted the Ducks for a monumental win for coach Mike Leach and the team. Along the way, the team displayed a running game that up to now was largely missing from their offensive arsenal, as well as a defense far more stout than the team's had in recent seasons. Yes, the Ducks aren't as good this year as the dominant squad they've had in the past — this was the team's third loss, and second straight in Eugene — but this is still a quality win against a bunch of really talented, highly recruited players, on the road.

After the game, someone on WSU's Twitter feed had a little fun at the expense of the Ducks and their Lewis-and-Clark themed helmets.
Oregon finds themselves outside the Top 25 after the loss, but what might this win mean for the Cougs and their fans? They have seven more games to get three wins that would make the team bowl-eligible, and this Saturday they will be favored against the scuffling Oregon State Beavers. After that game — which we could assume they will win if it weren't for, you know, them being the Cougs — the going gets tough for games against Arizona, Stanford, Arizona St. and UCLA. They won't be favored in any of thhose matchups. They might go into their final two games against Colorado and UW in the Apple Cup needing two wins to make a bowl. Not impossible — but that loss against Portland State earlier this year looms large.

The Cougars' game against the Beavers will air on the Pac-12 Network Saturday at 1 p.m.

It wasn't pretty. In fact, for three quarters-plus, it looked downright ugly as Eastern Washington struggled with with the howling wind in Cheney, and even more so with the great running attack of Cal Poly. Ultimately, the Eagles managed to battle back from game-long deficits to force overtime with two touchdowns in the final few minutes. And once they got to OT, they stopped a Cal-Poly two-point conversion that would have won the game, and instead the Eagles walk out 2-0 in Big Sky conference play and sitting atop the standings. They are No. 8 in the nation, and heading to Pocatello for a game against scuffling Idaho State on Saturday.

Read our complete coverage of the game.

SEAHAWKS MAKE SUNDAY A DAY OF NO REST

Seahawks.com
The 12s across the Northwest shared in the grumpy face Doug Baldwin sports here.
Let's see, a 17-point lead heading into the fourth quarter, a running game that's dominating the action even without Beast Mode playing, and a defense that looked like it was getting to its typical ass-kicking form after a couple of beatdowns at home?

I think most Seahawks fans would take that, especially against the historically wilting flower at quarterback for the Bengals, Andy Dalton, in charge of leading a comeback for the home team. Seattle coach Pete Carroll described the Seahawks collapse in the fourth quarter Sunday as "baffling," and most fans would probably want to add a few unprintable words to that, but ya, it was "baffling" at the very least. The Bengals scored 17 unanswered to get the game to overtime, where they eventually won on a field goal. Read ESPN's recap here, if you can stomach it.

Before any Seahawks fans go throw themselves off a bridge, consider that the Bengals are 5-0, so it's not exactly embarrassing for the Seahawks to lose on the road to them. More worrisome is that the only teams the Seahawks HAVE beaten so far are a couple of NFC bottom dwellers in Detroit and Chicago.

At 2-3, the Seahawks are two games behind division-leading Arizona in the NFC West, and in third place in the division based on their head-to-head loss at St. Louis to open the season. Seattle will have the chance for revenge against the Rams at the end of December, but in the meantime, they need to start putting together some wins to help secure home field in the playoffs. Yes, I'm talking about the playoffs already, because we all watched the Seahawks scuffle like this at the beginning of last year, and they ended up with the home field advantage. So, don't panic yet, 12s!

The next three games are against the undefeated (but one-dimensional) Carolina Panthers at home, then on the road to the utterly dysfunctional San Francisco 49ers and to Dallas for a game against the Cowboys, who are missing starting QB Tony Romo and star receiver Dez Bryant due to injuries. Win all three and we're looking at a 5-3 team on a hot streak when they get a home game against Arizona Nov. 15.

The return of Fargo, the poetic, gorgeously untrue detective drama