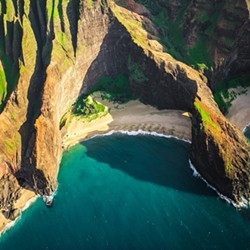 Dylan Schwartz
The cover of Noon Pacific's most recent playlist.
Every Monday at noon Pacific time, it arrives. A fully-curated feel-good indie playlist brought to you by Clark Dinnison, a Spokane native, at the Noon Pacific website/mobile app. Take this week’s playlist, for example: It starts with a upbeat, electronic pop song by Leo Islo, a Portland musician with a little more than 700 fans on his Facebook page. The playlist continues along in this vein; the sound is very much California-inspired and totally beachy. It’s mostly artists you’ve never heard of, and that’s the point.

“People like Noon Pacific because they see there’s a personal value to our mixtapes,” Dinnison says. “Everyone is trying to do it. Spotify and Pandora are making their own playlists, too, but those are seen as corporate. With us, there’s this sense we’re a personal, trusted tastemaker.”

Not only can users listen to this week's playlist, they can also play previous lists along with other collections. In the past year, the service has grown exponentially. The free app has 100,000 downloads, the email list has about 28,000 unique users. A few months, ago the streaming service was even featured in the New York Times.

Dinnison now live in Newport Beach, California, a place he feels lends itself better to a startup business. We last reported on Dinnison when he co-launched the Upbeat website/mobile app, which used a Reddit format for music where listeners could vote up songs they liked best. Although it received early press and accolades, the company never quite took off and has since dissolved. But Dinnison says he may someday combine that format into his Noon Pacific service.

At this for three years now, Noon Pacific was Dinnison’s first attempt at a website. He says it’s been through about five iterations and that the clean format it has now is finally right. Dinnison and his colleagues are constantly scouring Soundcloud and other music websites and blogs for new tunes. So far no artist has refused to be featured on the site. "They see it as great promotion," Dinnison says.

The mixtape is free to listen to and receive. No artist can pay to be a part of the playlist. Currently, the service is a labor of love, but Dinnison sees the potential to turn this into profit trying to expand to other platforms.

To get your weekly Monday playlist, sign up at noonpacific.com.

All the kid-friendly Halloween events we know of so far