CONCERT REVIEW: GO:OD AM tour blows up the Knitting Factory 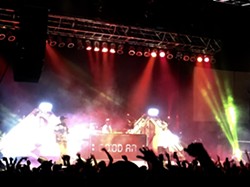 When a person like Mac Miller goes anywhere, it is sure to get weird. That word was thrown around more than once on Saturday night, as the Pittsburgh rapper’s GO:OD AM Tour rolled through the Knitting Factory in Spokane.

The stage was set by GoldLink and Domo Genesis, who infused energy in to the audience, constantly calling for hands in the air. Behind the performers the whole while were two large triangles sporting Miller’s face from the GO:OD AM cover. It was clear that this show was Mac Miller’s; the openers were just there to set the mood.

After about a 20 minute intermission, Mac finally took the stage, opening with his 2012 single “Loud” as he has for most every show on the tour. The second the first electronic sound pumped through those speakers, the crowd went nuts, as many had traveled from far and wide to see their high school hero take up the mic.

Jeff Davis, a Portland native, planned a trip out to Havre, Montana, to see his brother just because of the GO:OD AM Tour. Davis took a train to Havre on Thursday before eventually heading to Spokane for the show. What do you know, Mac Miller brings families together.

In addition to pulling fans from far away, Miller's concerts also attract all sorts of personalities with his devil-may-care attitude and eclectic electronic sounds.

An inhabitant of Spokane, Brendan Duffey found out only a couple days before the concert that his sister had an extra backstage pass. To Duffey, that could mean only one thing… Preparing his glorious mustache.

“My mom’s from India, everyone grows mustaches there,” said Duffey. “So I told myself, I can do this! The key is positive thoughts.”

Curling several inches beyond the length of a perfectly respectable mustache, Duffey’s lip hair is quite the spectacle. As a wearer of a handlebar mustache myself, Duffey’s caused me to feel inadequate in my ability to produce hair from the skin on my face. But, for as masculine and impressive as Brendan Duffey’s facial hair was, there was only one man on the minds of those in the Knitting Factory Saturday night.

Mac Miller came on at about 9:30 pm and played for around an hour and a half, primarily performing tracks off his new release. Yet, Miller did sprinkle a few classics throughout to satisfy the original fans in the audience.

The crowd was feeling good as Miller moved in to the meat of his setlist, pausing only to let Spokane know how great they were doing. There was certainly a level of romance between Miller and his Spokane fans, who according to Miller have never had a chance to see him. Apparently, Miller had a show scheduled here a couple of years back that was canceled.

Just like that the show came to an end and the inevitable cries of “encore” began to ring out through the confines of the Knitting Factory. The 23-year-old rap icon sauntered back on to the stage, closing with a multi-song encore that could have lasted forever. The final few songs were highlighted by an energized performance of the track “Jump” off GO:OD AM, featuring a grinning Miller with a bottle of Jameson whiskey in hand.

The show ended perfectly, as Miller frolicked around on stage with the rest of the lineup, bidding his faithful audience "goodnight." Still at full capacity by the end of the encore, fans reluctantly filed out of the Knit and away from a legendary night. Until next time, Mac Miller. Spokane will miss you.

THIS WEEK: Great music, author events, praying for snow and more on tap