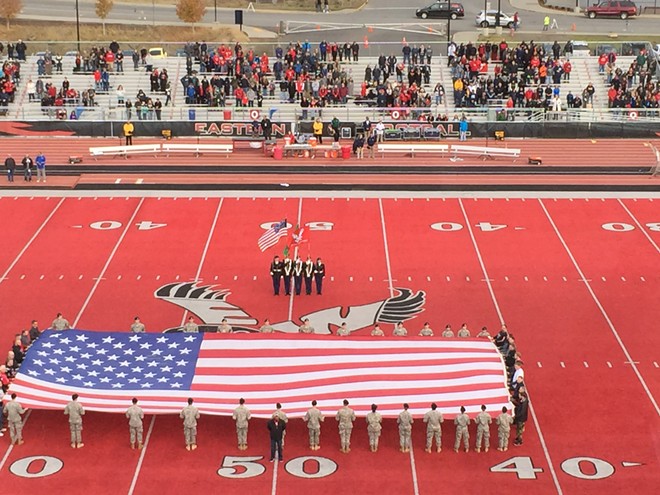 Celebrating homecoming and military/veteran appreciation night, the Eagles rocked their American flag jerseys, matching the bright red turf at The Inferno. On another sold out night at Roos Field, the Eastern faithful were as strong as ever, led by a raucous student section. Unfortunately, the fan support couldn't stop the streaking Lumberjacks, who defeated the Eagles 52-30.

After starting the game with two strong defensive series', the Eagles quickly fell to a 14-0 deficit fueled by two unlikely fumbles from redshirt junior running back Jalen Moore and record-breaking redshirt junior receiver Cooper Kupp. Then, with the second quarter moving along briskly and a goose egg still on the board for Eastern, Kupp began to make amends for his untimely muffed punt return.

Redshirt junior quarterback Jordan West polished off an 11 play, 75-yard drive with a beautifully lofted pass to Kupp in the back of the end zone. The touchdown was Kupp's 55th career touchdown reception, leaving him only three behind David Ball for the FCS career record.

Max Carter
Junior defensive lineman Matthew Sommer (94) hoists the football in victory after an important fumble recovery.
Northern Arizona responded to the score by driving in to Eastern's red zone, but the Eagles defense came up clutch on a 4th and 1 with a crucial sack of NAU freshman quarterback Case Cookus. West and company then drove the ball in to field goal range for Jordan Dascalo, but facing another windy night, Dascalo's kick missed left, sending the Eagles to the locker room trailing 14-7.

It didn't take long for NAU to extend their lead to 14 points, scoring on a one-yard pass from Cookus to sophomore receiver Emmanuel Butler only two minutes and 46 seconds in to the half. Despite the deficit, nobody wearing red at Roos Field had started panicking yet, as six of the Eagles' seven victories have been by only one score. And with the clock ticking away in the third quarter, EWU once again found a way to swing momentum back in their direction.

With the Lumberjacks driving at midfield and holding a 21-7 lead, the Eagles finally got on the other side of the turnover battle, as NAU's Cookus put the football on the turf. Eagles' junior defensive lineman Matthew Sommer fell on the football, holding it up in victory, seemingly telling everyone in Cheney that the game wasn't yet over.

Getting takeaways is important, but what really matters is what the offense does with it. One of the huge factors that has allowed EWU to be 6-2 this year has been capitalizing on opportunities, and that was no different on Saturday night. With 7:51 left in the third quarter, West hit sophomore receiver Terrence Grady for an 11-yard touchdown to bring the Eags within one score and keep their hopes alive.

Max Carter
Redshirt senior tight end Terry Jackson (89) congratulates sophomore receiver Terrence Grady (88) after his third quarter touchdown catch.
But Northern Arizona was merciful and quickly put that hope out of its misery, responding with ten unanswered points highlighted by a 70-yard interception return for a touchdown by senior corner Marcus Alford. The pass from EWU's Jordan West was tipped by senior safety Darius Lewis, allowing Alford to snatch it and take it to the house. Then things got rarely out of hand for the Eagles.

On the ensuing kick-off, redshirt freshman receiver Simba Webster surrendered the third fumble of the game by Eastern and their fourth turnover of the game. The Lumberjacks weren't messing around, quickly scoring on a two-yard run from sophomore running back Corbin Jountti. Trailing at that point 38-14, with the chances of a victory all but gone, Beau Baldwin decided to surrender the offensive reins to redshirt freshman quarterback Reilly Hennessey.

Despite an efficient scoring drive from the Hennessey-led offense to bring the score to 38-22, the Eagles couldn't muster another comeback victory this time.

Northern Arizona scored on the following drive, plunging the dagger deeper with another touchdown from Jountti, making it 45-22 Lumberjacks. Jountti later recorded another rushing touchdown, giving him his third of the night and sealing the victory even tighter for NAU.

This was the third Eastern Washington Eagles football game that I have attended in 2015. I can honestly say that the first two were the two strangest football games that I've ever watched.

First, the Eagles pulled off a victory against Cal Poly despite allowing over 500 rushing yards to the Mustangs. Then, EWU defeated Weber State 14-13 while possessing the football for an unbelievable 18 and a half minutes. But when you turn the football over four times, it is pretty difficult to win games, and the Eagles learned that the hard way on Saturday night.

With 1:01 left and the game all but over, Hennessey ran in to the end zone for a touchdown and some garbage points, bringing the final score to 52-30. Beau Baldwin and his Eastern Washington football team will look to rebound next week in Montana against the Grizzlies.

The Cougars grind one out over Arizona State

CONCERT REVIEW: GO:OD AM tour blows up the Knitting Factory