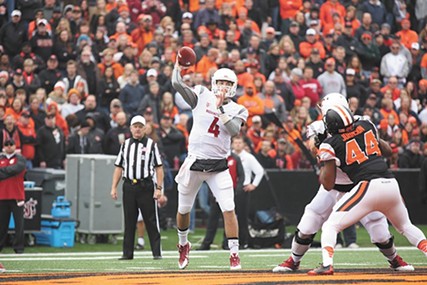 This is a tough time for us sports fans. We have a lot on our plate right now, what with college football moving into high gear, college hoops tippings off, the NFL continuing to dominate the world and NBA games apparently happening somewhere. And if you're into soccer, that's probably happening, too. This makes for weekends like this past one, the results of which leave you staring at the wall on Monday morning, trying to remember everything you watched.

And this past weekend was just about as insane for Northwest sports fans as any weekend in recent memory. Let's break it down, starting with the positives — because there are some serious negatives here, too.

THE GOOD
If it seems like it's been forever since Washington State football was relevant on a national scale, that's because it has. A dozen years, in fact. But if you woke up this morning and realized that the coaches poll has deemed WSU the 23rd best team in college football, you realized that this Cougars team is for real.

In year four of the Mike Leach Experience, Presented by Uncle Bonzo's Hair Tonic, the Cougars are a verifiable college football power, thanks to a stunning last-second 31-27 win over then-19th-ranked UCLA down in Pasadena late on Saturday night. The game was true to the Leach-era story in that the Cougars gave up an interception with three minutes left that allowed the Bruins to march down the field for a score.

But Luke Falk, who got his bell rung in the first half yet somehow returned to action, then did the impossible with just 1:10 left in the game: he took the Cougars the length of the field, connecting with Gabe Marks with just three second left. The unbelievable highlights are right here.

The Cougars are in Pullman to face Colorado on Saturday. After that, it's off to Seattle for a Black Friday Apple Cup date (game time was just announced as 12:30 pm, by the way) with Washington. And in a weekend when Oregon toppled Stanford, there's a statistical possibility that the Apple Cup could get the Cougars into the Pac-12 championship game.

THE BAD
You know what was nice? The first 10 or so seconds after I woke up this morning before my brain reminded me about the goddamned Seahawks game last night.

If you didn't know, the Seahawks lost to the Cardinals 39-32 last night in Seattle in a game that was mind-bogglingly frustrating for 12s everywhere. The Hawks got blown out in the first half because their offense forgot how to play football and the Cardinals' Carson Palmer decided he is going to become the best quarterback in the league.

But then in the second half, the Hawks came storming back with some huge defensive plays and it looked like they were going to pull the damn thing off. But then this happened. And that dance pretty much sums things up.
I can't type anything else about this game because I don't enjoy being sad. But this probably means the Seahawks are not going to the playoffs and definitely not the Super Bowl, which is what fans have unrealistically come to expect as a right at this point. I'll still watch the Hawks, because it's what I've been doing every Sunday since I was born, and you should, too. Maybe it will be more fun without all the pressure.

THE UGLY
There have been signs that all is not well with the Eastern Washington Eagles. They lost last week and then headed to Missoula to face Montana in an enormously consequential Big Sky game. We knew it would be an uphill battle, but no one foresaw what happened over there.

The Eagles got destroyed. They got embarrassed. They had their souls sucked out of their bodies. They lost 57-16 and could have lost by much more, considering they gave up 50 points in the first three frames.

THE WEIRD
I was giddy on Friday afternoon knowing that Gonzaga basketball was finally here, but that sure fizzled out in a hurry as the Zags only played one half of basketball. And I'm not saying they dragged ass in the second half or something, I mean that literally. There was no second half.

Because ESPN loves a good gimmick, they arranged for the Zags to play in Japan against Pittsburgh at a military base. Now, I fully support the notion of our troops getting to see some high-grade college hoops, but the execution was lacking in that the game was played in a hot-as-hell fieldhouse. Even the announcers were dripping with sweat. And that moisture made it to the court, making for a wooden slip-and-slide that gave one Pitt player a nasty cut.

So after halftime, the referees called the game. It was a hell of a long way to fly to play one half of basketball and it didn't give us a great look at the Zags, either. They were down by a bucket when it was called, but with guys running at 75 percent out of fear of death, who knows how accurate that score is in terms of the team's talent. One thing, though: Kyle Wiltjer looked smooth with his shot. He is the real deal.