The use of power (electric and mayoral) and other stories 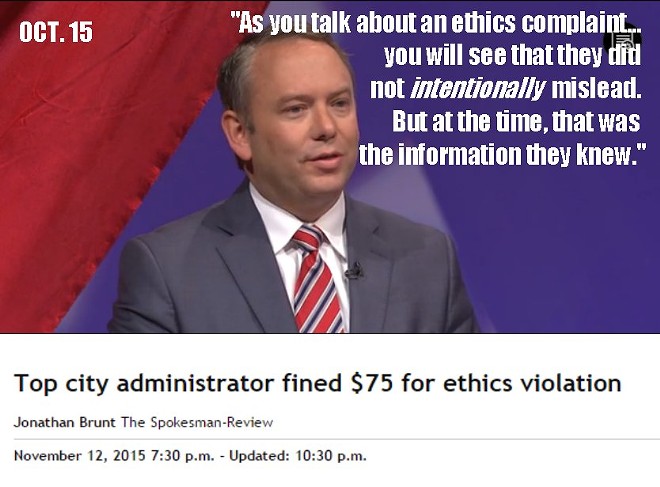 Mayor David Condon's claims about his administration's honesty have not aged well.
It depends on what the meaning of the word "lodged" is

When the Inlander asked Mayor David Condon if any sexual harassment complaints had been lodged against former Police Chief Frank Straub he gave a flat "no." Well, if you define lodge as to "present (a complaint, appeal, claim, etc.) formally to the proper authorities" then technically, no complaint was formally presented.

But Spokesman-Review Shawn Vestal isn't letting Condon off the hook:


That was a technical truth quacking like a lie. No formal complaint was filed, but the mayor had long since assigned an investigation into Cotton’s assertion that Straub had inappropriately touched and talked to her, and taken steps to prevent her from filing a claim against the city.

And now, guess what? The mayor of transparency and accountability – the guy who ran on a promise of cleaning up the police department – isn’t answering any questions. His spokesman, Brian Coddington said, “The records speak for themselves.”

Boy, do they. And what they say is this: Faced with a credible accusation of sexual harassment against the police chief he hired to restore credibility to the department, Condon attempted to hide it – to pay the victim and leave the alleged offender right where he was, supervising other women.

All power is finally restored.
Praise be unto Avista!

Thanksgiving Feast
Avista crews, incidentally, worked through Thanksgiving. KREM reports at least one lineman got free donuts and cookies from grateful neighbors as a result.

Trumptzpa
Donald Trump appeared to mock a New York Times reporter for his disability. Now, he wants an apology. Trump, to be clear, is the one who wants the apology. From the New York Times.

TURKEY EDITION: Stories you need to know as you start your day