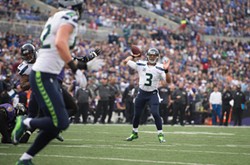 Nothing feels quite as good in the NFL as a good old-fashioned ass-whoopin, does it? They are so rare, due the fact there are, you know, professional football players on every team. But every once in a while, a team gets it rolling over an overmatched opponent and just destroys their foe to such a degree that a whole city goes home depressed.

I would imagine the good people of Baltimore are turning their attention to baseball spring training right about now. They haven't been good for a while this year due to injuries to several key players. And then the Seahawks crossed the country to play the hollowed-out shell of what was not long ago a Super Bowl-winning Baltimore Ravens team, and Russell Wilson went crazy throwing the ball, dropping five TDs on the sorry Ravens, eliciting MVP talk even though the team's early-season travails will hurt his cause. The final was 35-6, and it was the Seahawks second straight curb-stomping of an overmatched opponent on the road, after pummeling Minnesota a week ago.

The Seahawks are happy, and with good reason. How happy? Well, coach Pete Carroll is high as hell on how well the team is playing right now:

It's not all good news, of course. Rookie running back and Baby Beast Thomas Rawls broke his ankle and will be out for the season, and that's particularly concerning since no one knows when Marshawn Lynch will be back on the field. But the Seahawks have home games the next two weeks against the Browns (consider that a win) and the Rams (a revenge game, and another win) before playing the Cardinals in Arizona in a game where the Cards might be benching their starters and coasting into the playoffs as the No. 2 seed.

Assuming the Seahawks finish the season 10-6 or 11-5, their most likely foe in the first round of the playoffs would be the NFC East champ—the Giants, Eagles or D.C. Team That Shall Not Be Named. Anyone afraid of that matchup?

GONZAGA IS NOT DESTROYING ANYONE RIGHT NOW 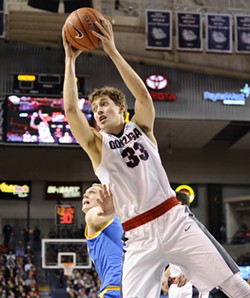 GoZags.com
Kyle Wiltjer can't do it alone for Gonzaga.
A week ago, the Zags were looking at upcoming games against Montana and UCLA, and expected two wins for their effort. Instead, Mark Few's squad went 1-1, and probably feel lucky they escaped that upset bid by Montana during the week.

Saturday's game against UCLA felt like a better effort than Gonzaga's loss to Arizona at home a week earlier. Still playing without center Przemek Karnowski and still breaking in a new rotation of guards after the graduations of Kevin Pangos and Gary Bell, Jr., the Zags leaned heavily on Kyle Wiltjer (20 points) and Domantas Sabonis (18 points) but fell short to UCLA, 71-66.

Against Arizona, the Zags raced to a big lead, and then proceeded to shit the bed for pretty much the entire second half, flailing their way to the loss. Against UCLA, the game was more of a back-and-forth affair, competitive throughout, and losing to the loaded Bruins — five players average double figures — is nothing to be too bummed about.

The Zags definitely have issues. With or without Karnowski, Gonzaga needs to get better guard play on offense (ie. more scoring, less turnovers), Few needs to figure out ways to get Wiltjer more shots throughout the game, and Sabonis needs a little help inside since he's prone to getting into foul trouble.

Gonzaga plays tonight at 6 pm against St. Martins University (quick quiz — where is St. Martin's?) before they battle in Seattle against Tennessee on Saturday. That game against the Volunteers and one later in the season against SMU are the Zags last two chances for prime non-conference wins, and they need to take advantage after losing to Arizona and UCLA. Running the table in the WCC would go a long way toward getting a decent seed in March Madness, too. Whether or not they can do that without their ailing bearded behemoth in the middle of the lane remains to be seen.

5 stories you need to know this morning