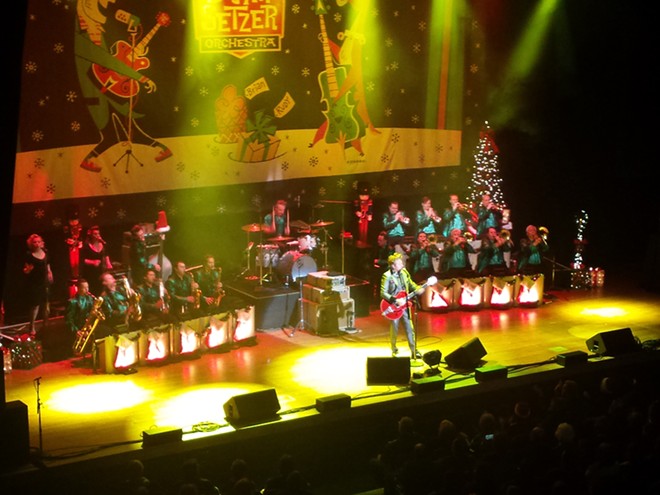 Dan Nailen
Brian Setzer leading his big band through a post-Christmas rockabilly throwdown.
The day after Christmas is pretty much the very definition of a letdown. How can anything you do compete with the fun of gathering with friends and family and opening presents?

If only we could have Brian Setzer for our post-holiday entertainment every year. Leading his Brian Setzer Orchestra, a 19-piece big band of talented players, at the Fox Theater Saturday night, the retro-rocking guitar man delivered in ways Santa could only dream of — unless the fat man has some six-string chops he's been hiding.

Veering from holiday songs to cuts from his work in the Stray Cats and as a solo artist, Setzer kept all the spirits in the house high with energetic tunes, thankful stage banter and incredible musicianship on songs that moved from jazz to swing, rockabilly to, during the encore, classical.

Any fans of Setzer know he has the chops to play pretty much any kind of music he wants to, so the dive into Christmas tunes every few years might seem a little odd at first. But as he opened the show with "Rockin' Around the Christmas Tree" and "Cat on a Hot Tin Roof" before giving the Spokane audience a taste of his breakthrough band with the Stray Cats' "Stray Cat Strut," it was clear the combination of old-school rock 'n' roll and even older holiday music would work.

Setzer and his band rarely stuck to one style for more than a song or two. He would follow-up a sing-along Christmas carol like "Here Comes Santa Claus" with an '80s-era MTV Stray Cats hit like "Sexy + 17," bringing his two excellent backup vocalists from the Orchestra, Leslie Spencer and Julie Reiten, up front to trade lines on the latter. He following up "Angels We Have Heard on High" with one of his solo tunes, "Let's Shake," on which numerous members of his band got exhorted to stand up and offer a solo on trumpet or trombone or saxophone.

Dan Nailen
Santa showed up to dance, despite working all the previous night.
What could have been a night simply of Christmas cover tunes was so much more thanks to Setzer's desire to showcase both his band and the old American music that made him a star in the '80s, playing rockabilly on the radio right alongside the synth-pop of Duran Duran or the dance tunes of Michael Jackson.

His cover of Jerry Lee Lewis's "Great Balls of Fire" was a highlight, with Setzer sending much of his orchestra off stage and paring the group down to just drummer Daniel Glass, standup bass man Johnny Hatton and a piano player (sorry, didn't catch his name). He followed with the Stray Cats' "Fishnet Stockings," another rockabilly rave-up that nearly made me forget I was at a Christmas show.

Setzer's biggest commercial hits — the Stray Cats' "Rock This Town" and Brian Setzer Orchestra cover of Louis Prima's "Jump, Jive an' Wail" — were the obvious crowd pleasers, and with good reason. They're both upbeat, fun songs that are virtually impossible to sit still to while you listen. But the most impressive musicianship might have come in the encore, when the the orchestra followed up the silly Fred Flinstone tribute "Yabba Dabba Yuletide" with a hectic run through "The Nutcracker Suite."

It was a lovely way to end a spirited night out, and after a sing-along of "Jingle Bells," Setzer and his 19 companions took a well-deserved bow as the man promised to come back to Spokane for a second visit someday.

Stories you need to know as you start your week