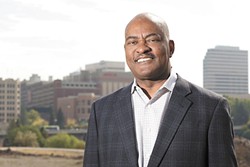 Young Kwak
Elson Floyd died of cancer at 59.
Washington State University unveiled designs this week for a new cultural center named after Elson Floyd, who died from complications related to colon cancer last year at the age of 59.

The 16,000-square-foot building, located near the intersection of NE Stadium Way and SE Spokane Street on the Pullman campus, will contain a living room for gatherings and performances connected to four "knowledge rooms" intended to educate people about underrepresented populations in the state, according to the school. There will also be a kitchen, a gallery, a meditation pavilion and offices for the school's diversity education program.

“President Floyd wanted a state-of-the-art building different from others that clearly communicates that WSU embraces diversity in a serious way,” J. Manuel Acevedo, director of WSU's office of multicultural student services, said in a press release.

Construction on the project will begin this spring. The university expects it to be completed by summer 2017. WSU has already announced that its Spokane medical school would be named the Elson S. Floyd College of Medicine.