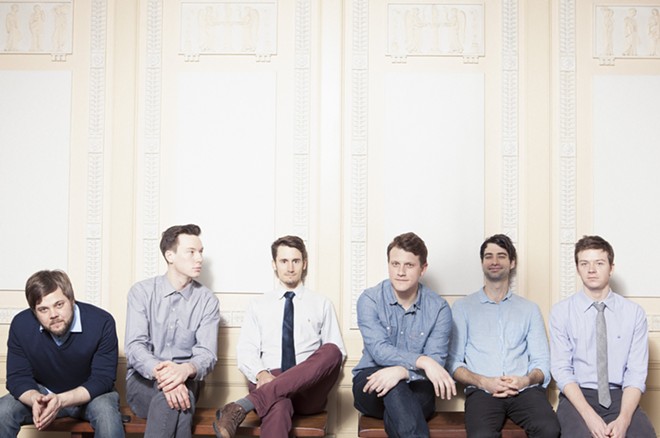 There are a lot of white guys in west-sider indie folk-pop act Hey Marseilles.
TONIGHT
Hey Marseilles, a veteran presence in the Northwest music scene, is known for its brainy, baroque take on indie folk-pop. The group has been making music together for nearly a decade, but with a new creative direction and new ambition fueling the release of a new self-titled album on Feb. 5, this year is shaping up to be a rebirth of sorts for Hey Marseilles, says freelancer Ben Salmon. Expect to hear quite a few of the new tunes at the band’s upcoming Spokane show tonight at the Bartlett starting at 8 pm. The show is $15 at the door.


SATURDAY
The third edition of the Viking’s Outcold festival won’t be so cold; music is set for a heated and enclosed tent outside. “This is the first year we have this setup,” says event coordinator Steven Barclay. “Usually we kind of grin and bear it.” The event, which includes two stages — the outside one that’s all-ages, and one inside the Viking that’s 21 and over — includes a fresh mix of local and national acts, with death-pop rockers Orgy headlining. A portion of the ticket proceeds go to the F—- Cancer foundation. Other bands include Bobaflex and Death Valley High, The Nixon Rodeo, Elephant Gun Riot, December In Red, Invasive, Death By Pirates, The Broken Thumbs, Beyond Today, Banish The Echo, Evolved, Rising Enemy and Volcanoes on the Sun. Tickets are $15.

Feel the “Sunshine” Saturday as Lil’ Flip takes to the Pinnacle Northwest stage. The Houston rapper is mostly known for a string of hits in the early-aughts, but his sixth album El Jefe, was released last year. Local and regional acts Demon Assassin, Pest, Alvin Artzis, Disk Jockey Felon, TLG, Young West, KC, Reservation Maniak, Kosh, Fogey and Easty Montana are all there to keep the night going. Cost is $15 and show starts at 9:30 pm.

The Round artist and musician series continues at the Bartlett Saturday. This time performers include singer-songwriters Matt Mitchell of Folkincption, Hope Hines and Chelsea Hendrickson along with poet Dennis Held and a live painter Chelsea Hendrickson. The show is $8 the day of and begins at 8 pm.