Earlier this morning, American scientists made the groundbreaking announcement that they'd finally detected a phenomenon predicted 100 years ago by Albert Einstein through his general theory of relativity: the existence of gravitational waves, or "ripples in the fabric of spacetime."

Using a system called the Laser Interferometer Gravitational-Wave Observatory — LIGO for short (pronounced Ly-go) — scientists working on the project led by MIT and Caltech have finally succeeded in detecting the remnants of a cataclysmic merging of two black holes more than a billion years ago.

While what LIGO discovered was an incredibly minute signal — a half-second blip that scientists call a "chirp" — this discovery is obviously groundbreaking when we consider how it could help give us a better understanding of the cosmos' infinite mysteries: black holes, dark matter and astronomical events of the universe perhaps yet known.

What's really cool about the discovery for residents of the Pacific Northwest, however, is that Washington state played a major role in the multi-national collaborative effort with which more than 1,000 scientists worldwide are involved. 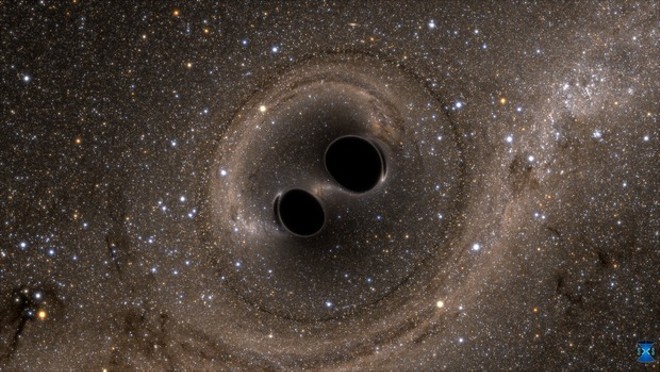 LIGO's detection system consists of two identical facilities, one in Livingston, Louisiana, and the other in Hanford, Washington, about 15 miles north of the Tri Cities. From a press release about the discovery, here's how the twin detectors work:

At each observatory, the two-and-a-half-mile (4-km) long L-shaped LIGO interferometer uses laser light split into two beams that travel back and forth down the arms (four-foot diameter tubes kept under a near-perfect vacuum). The beams are used to monitor the distance between mirrors precisely positioned at the ends of the arms. According to Einstein’s theory, the distance between the mirrors will change by an infinitesimal amount when a gravitational wave passes by the detector. A change in the lengths of the arms smaller than one-ten-thousandth the diameter of a proton (10-19 meter) can be detected.

In simpler words, as the gravitational waves pass over Earth's surface, they cause these L-shaped arms to shorten simultaneously at both sites. The reason for having two observational sites is to allow scientists to determine the direction of the originating event. This also ensures the signal isn't being caused by another local phenomenon, because they're observed within milliseconds of each other at both facilities.

The search for these incredibly faint ripples in gravity has been underway for decades now, and has been quite controversial because after more than a billion dollars from the National Science Foundation was invested into the LIGO, it had yet — until now — to produce any results. A recent major upgrade to LIGO to increase its instruments' sensitivity is what made possible the detection of the gravitational waves, which occurred on Sept. 14, 2015. Remarkably, the discovery of the waves happened just days after that upgrade to the Hanford LIGO site was complete.

It's going to be so exciting to see what this incredible, landmark event leads scientists to confirm and explain next about our infinitely complex and massive universe. For those of us who like to be marveled by the wonders of science, now seems like a great time to ride out this excitement while re-watching episodes of the Neil deGrasse Tyson-led series Cosmos: A Spacetime Odyssey.

For further reading on this topic, the following reports from major media outlets go into more detail about LIGO's discovery and what it means for the future of astrophysics:

Also, you can now watch this morning's full press conference about the LIGO discovery on YouTube.