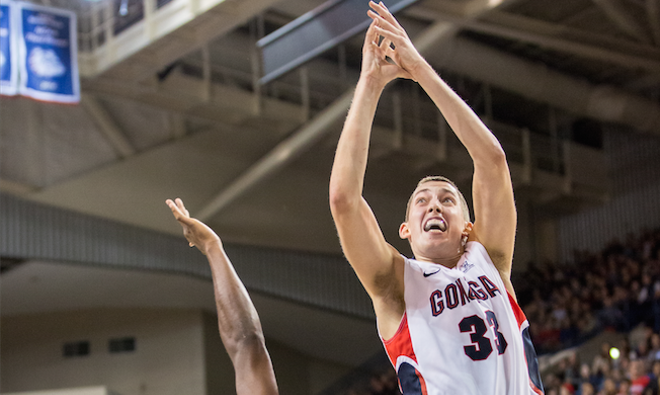 That seems the best advice for Gonzaga fans who suddenly find themselves in the rare position of REALLY needing the men's basketball team to win the WCC tournament in Las Vegas to assure themselves a spot in March Madness.

Saturday's Senior NIght loss to St. Mary's — the second year in a row the Zags have lost their last home game — put the Gaels atop Gonzaga in the conference standings, winning the tie-breaker due to sweeping the season series with the Zags. And with a road trip that includes a visit to BYU, a team that beat the Zags in Spokane earlier this year, it is not beyond the realm of possibility that Gonzaga ends the season in third place and with the No. 3 seed in the WCC tourney.

That wasn't exactly the plan at the beginning of the year, when it looked like — with a little luck and great play from the new guards — Gonzaga could equal last year's run to the Elite Eight based on the play of preseason College Player of the Year Kyle Wiltjer, manchild Domantas Sabonis and giant center Przemek Karnowski. As we all know, Karnowski got hurt early and was lost for the season, Wiltjer has been inconsistent and Sabonis, well, Sabonis has been even better than expected. He's NBA-ready, and Zag fans need to start hoping he hangs around for another year.

Saturday's loss was pretty ugly. The Zags shot just 36 percent from the field compared to St. Mary's 48 percent. Wiltjer had just 13 points in his home finale, and Sabonis had just 7. The Zags were down seven at halftime, and lost by 5, and never really looked in control.
That's a recurring theme this season. So now we wait and see what happens in Vegas. And, hey, at least there's an HBO series documenting Gonzaga's toughest season in years. Here's a look at the first episode, in case you missed it.

This week, the Zags play at San Diego on Thursday and at BYU Saturday.

COUGS LOST SEASON
Speaking of Senior Night losses, WSU went down to Cal Sunday night 80-62, the team's 13th straight loss. The Cougs are 1-14 in the Pac-12 and assured of being the lowest seed at the Pac-12 tourney in a few weeks. The tough year gets worse every game, and I'm sure people are starting to grumble in Pullman about Ernie Kent's future as coach.

WHITWORTH WINS CONFERENCE
The Whitworth Pirates had the best weekend among the region's men's basketball teams, clinching the Northwest Conference Saturday night with a close win over Pacific Lutheran, 73-71. It's the team's seventh straight conference title, and they are currently ranked No. 3 in the country. Thursday night, they host a conference semi-final game against Puget Sound.

Coming up, the two teams play each other Saturday in Moscow.

Nevada caucuses, local bus fares, a phone scam and other news you need to know

Violent Femmes headed to Spokane in May