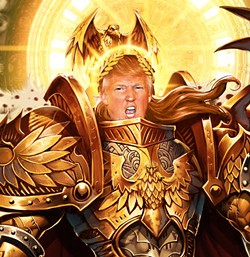 Kneel before my glory, Chris Christie! Swear your fealty to your God Emperor Trump!
ON INLANDER.COM

Baumgartner + City Council = 4 Eva
State Sen. Michael Baumgartner, who's clashed recently with the City of Spokane, sent a bunch of Valentine's chocolates to the City Council.

Up In Smoke
Facebook gets a bit square, starts deleting pages for stores legally selling marijuana.

Money, like the noble cockroach, prefers the dark
• Andy Billig's bill to try to expose dark money dies yet another death. (Spokesman-Review)

Like the British in the Revolutionary War, the City of Spokane hires a Hession.
• In the midst of defending itself from a complicated lawsuit from Frank Straub, the city has brought in a firm to oversee outside legal counsel involved with the Straub case. The chief point of contact for that firm? Former Spokane Mayor (and former Ben Stuckart opponent) Dennis Hession. (Spokesman-Review)

you don't have to bother calling the cops
• If you must run into another car, don't make it a Spokane County Sheriff’s Office car. (KREM)

Ugh
• Craig Morgenstern, the VA doctor who sexually abused kids and videotaped it, has been found guilty on all 35 counts. (KXLY)

You Win or You Die
• Super Tuesday last night was indeed super for Hillary Clinton, who continued to ride her Steamroller of Inevitability methodically toward the Democratic nomination. But for Republicans? These are dark times for Republicans, in which, somehow, every candidate had a bad night.


• Donald Trump won a bunch of states, but underperformed his polls and lost more than he expected to. The bandwagon effect where everybody just gathers around the apparent frontrunner just ain't happening.

• Ted Cruz took home Texas, Alaska, and Oklahoma. He's far ahead of the delegate total of Rubio. The problem? These were his states. This was his last, best hope to clean up. The next round of states aren't looking so hot for them.

• And Rubio? Well, he finally won a state, Minnesota. But Kasich cost him Virginia, and he's still trailing far behind Trump. The fate of Rubio hinges on Florida. The problem? Trump is crushing it in Florida polls.


In fact, the best predictor of this race has not been statistician wunderkind Nate Silver. It's been George R.R. Martin, creator of the Game of Thrones series of novels. WARNING: SPOILERS FOR THE REPUBLICAN PRESIDENTIAL RACE FOLLOW:


The Starks are long since dead, and the Seven Kingdoms have been thrown into chaos. Instead, the North is ruled by the cruel Boltons, who proudly wave the banner of the Flayed Man. A former ally of the Starks, after betraying his friends out of a sense of wounded pride, has been turned into a servant of the Boltons, castrated, psychologically broken and transformed into a laughingstock.

Left to oppose the Boltons are a stubborn, inflexible pedant who everyone hates, and a fresh-faced young leader who, despite the potential of royal blood, has been betrayed by a jealous older ally and is now left bleeding in the snow. Now, even those who've spent their whole life despising the Lannisters are considering grudgingly supporting them, desperately hoping that, as they ride out the long winter, Iran doesn't get a dragon.

For the GOP, truly, the night is dark and full of terrors.

Herbie's Folly
Google's Self-Driving Car had its first accident. What does that mean for the future of driverless cars? (The Atlantic)

Abort? Retry? Fail?
Yep, the FBI screwed up by trying to reset the iPhone's password. And now it wants Apple to bail them out? (New York Times)

Happy Hour of the week: Throwing it back at the Volstead Act