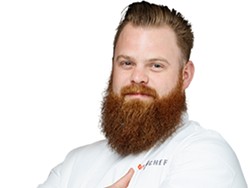 Chef Chad White
The Steel Barrel Tap Room is hoping to open its doors in time for Bloomsday, and whenever the brewery-incubator space in the Luminaria Building launches, Chef Chad White will debut his new ceviche spot right alongside.

Zona Blanca Ceviche bar will be a small counter-service raw bar that White says will specialize in the coastal flavors of Mexico. White, who recently moved back to his Spokane hometown after establishing himself in San Diego's dining scene and appearing on the most recent season of Top Chef, has traveled extensively throughout Mexico. The flavors he found will fill the menu of his first Spokane eatery.

Most of the menu at Zona Blanca will be filled with ceviches representing different coastal regions of Mexico — Baja, Sinaloa, Veracruz and others — while also including other street snacks such as Carne Seca marinated in lime, chiles and cilantro, chicharrones with hot sauce and "possibly a torta or two."

Spokane, White said via email, "still lacks in its offerings of non-watered down and over-Americanized ethnic food establishments, and with Zona Blanca I intend to help feed the appetite of those looking for just that."

The Steel Barrel Tap Room, 154 S. Madison, is in a final push of licensing and construction, and will be launching a Kickstarter Friday to help with the expenses associated with getting the doors open, including licensing costs and getting some inventory ready for opening day.

The tap room is affiliated with the Spokane brewery incubator the Inlander  wrote about last year, and will serve beers from two new breweries connected to the space — Young Buck Brewing and Little Spokane Brewing — as well as a selection of curated craft brews from around the country, according to Little Spokane's Joe Potter.

Eventually, the incubator has plans to host more local brewers. In the meantime, the Steel Barrel space will serve beers, and Pete McArthur of Spokane Valley's Nu Home Brew & Bottles will be the tap room manager. There will also be a cocktail bar, Potter said.

"Beer is not all any of us drink," Potter says. "We're all interested in cocktails. Bourbon is big, whiskey, Scotch. We like to taste those, so a lot of our cocktails will probably end up bourbon-centric. But we'll have a lot of the old standbys as well."

Having White's first Spokane restaurant as part of the Steel Barrel space, Potter said, is a "great opportunity" and a step beyond the small plates and bratwursts they were considering.

"He'll have a kitchen space, and although he'll run it separately, it's right there and it will be our patrons purchasing his food, and his patrons drinking our beer, hopefully," Potter said.

"I'm really excited. I love seafood. I love ceviche. I love Baja-style tacos, so I'm sure I'm going to eat my fill. I'll probably dissolve my mouth with all the lime juice."

While the goal for a Steel Barrel soft opening is early May, you don't have to wait to sample the wares from either of the breweries, or Chef White. All of them are taking part in Chef Week PNW, going on right now at the Washington Cracker Co. Building.

White is one of the chefs cooking Thursday night at a six-course dinner focused on ahi tuna, while on Friday, both Young Buck Brewing and Little Spokane Brewing are premiering their beers at Chef's Week from 11 am to 3 pm.

You can also still make reservations for a special wine pairing dinner Chef White is doing at Chaps on Monday, featuring local produce from the Palouse "expressed with Mexican flavors." Only 30 seats are available at $150 per slot; call Chaps at 509-624-4182 for reservations.

Police weren't going to investigate the Jones Radiator art theft, but now they are