Repeat after me: The Central City Line is not a trolley. It's not a streetcar. It's a bus.


The Central City Line is not going to be a trolley.

The Central City Line is not going to be a trolley.

The Central City Line is not going to be a trolley. 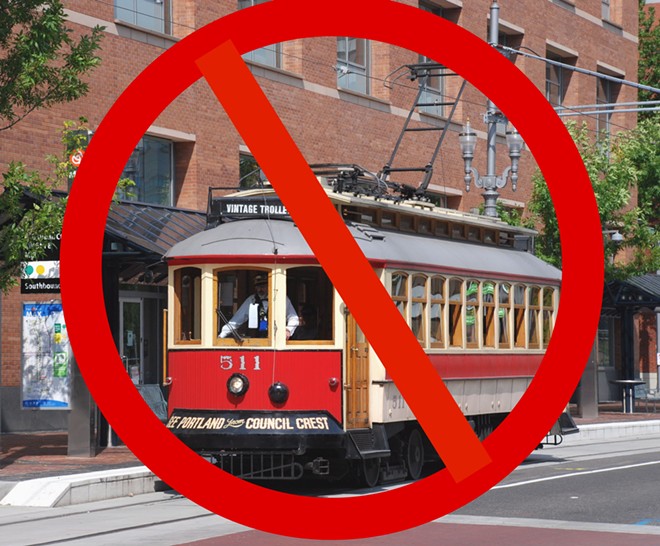 Only YOU can prevent people from incorrectly referring to the Central City electric bus project as a "trolley."
As the debate over funding the Central City Line continues, the notion of a "trolley" has been particularly difficult to dislodge.

For example, a recent KREM story started this way:


SPOKANE, Wash. – The Spokane Transit Authority (STA) is re-working its plans on bringing a new electric trolley to Spokane. Voters already denied it once but STA leaders think they have a better proposal this time.

It failed by 572 votes when it was voted on last time. STA hopes that a lower cost on the proposal will get it to pass this time.

“First off it is a bus,” AICP Director of Planning Karl Otterstrom said about what some people are calling an electric trolley.

But this is not a matter of what "some people" say. It's a matter of facts. A trolley is different from a bus. You can squabble over the definitions of the difference between a streetcar or a trolley or a cable car, but let's use these to make it easy:

Trolley: a streetcar propelled electrically by current... from a conducting wire strung overhead or running beneath a slot between the tracks.

Streetcar: a vehicle that travels on streets on metal tracks and that is used for carrying passengers. Sometimes used interchangeably with . Blanche Dubois took one of these, named "Desire," when she arrived in New Orleans.

Trolley bus/trolley coach: A vehicle that is powered by overhead wires but moves on rubber wheels. No track.

And yes, a long time ago, the plan was for a trolley bus. We wrote about it way back in 2013, in a story with the awesome headline "Streetcar Desired."  The hope was that the trolley/bus hybrid would generate a similar sort of economic impact as a streetcar or light-rail system — with the permanent route inspiring businesses to make investments — without the huge costs of laying down tracks.

But starting in 2014, two things happened:

1.) It turned out that the trolley bus plan would be a lot more expensive than anticipated.

"The technology is the way of the future," says STA spokesman Brandon -Betty. "That’s the direction everybody is going."

This isn't some crazy new change to the plan. The shift from a "trolley" plan to an "electric bus" plan happened before the STA ballot measure last spring. You'd know that if you read our article.


The high-frequency bus route would stretch from Browne's Addition through downtown and to Spokane Community College. Boarding — riders would prepay at the station, and board using all doors — would be far faster, and buses would depart every 10 minutes.

Initially, the line was proposed as an electric trolley-style bus, running on overhead wires. Other cities have seen economic investment spring up alongside light rail tracks, and STA hoped that a cheaper alternative would produce similar results. But when the cost of the overhead-wire design proved too pricey, STA shifted, instead proposing using electric charging stations on either end. The design, more electric bus than trolley, would still be eligible for federal grant dollars. Conventional buses, while cheaper, wouldn't.

After the vote failed, we continued to call it an "ambitious high-frequency electric bus system." But news stations like KXLY, in headline after headline, kept calling it a "trolley." (STA staff has also reached out to the Spokesman-Review to make sure they don't use the word "trolley.")

As STA has worked on design and planning and grant applications, it's all been focused on electric buses, not trolleys.

"The phase we're in right now, which started last summer, everything is the 'electric bus'," Otterstrom says. "We haven’t done processes for any type of trolley buses."

We get the temptation. A trolley has a fun, silly "deck the halls with bells of trolley" sound to it. It seems fantastical and kitschy, like something out of Mr. Rogers' Neighborhood. A trolley sounds sort of close to the sort of public transportation that invokes chants of "Monorail! Monorail! Monorail!"

And because there are pretty strong arguments against streetcar systems, it's easier to attack the Central City Line if it seems like a streetcar.

Consider this 2014 op-ed from the Washington Policy Center, a group that has seemed fond of "more like, electric folly"  bon mots:


If STA officials really believe the demand is such that a central city line is needed, they could look at a less-expensive bus rapid transit-type system already in place in cities across the country, including Everett and Eugene. New buses could be designed to look more like trains, rubber tires could be hidden, current street lanes could be dedicated and painted a lilac color to match the mode, and numerous stations could be built along Spokane Transit’s electric trolley or electric folly line with covered seating and ticket kiosks. All of this could be done at a fraction of the cost. And here’s an idea — call it the Lilac Line or Lilac Link.

Coloring and name aside, that seems a lot like STA's plan. STA says they're pursuing a less-expensive 'bus rapid-transit system.'

“The only distinction is the bus [is going to be] electric,” Otterstrom says.

But Chris Cargill, with the Washington Policy Center, says that he still doesn't like the revised plan.

That moves us to another definitional debate. Cargill says the project doesn't truly meet the definition of a bus rapid-transit system, which he says should include dedicated right-of-ways, intersections giving the buses signal priority, and bus-only corridors. He notes the STA rejected a version of such a system when considering electric-trolley alternatives back in 2011-2012.

"Whether it’s a trolley or a bus or a trolley-bus, it’s not technically a bus rapid-transit system," Cargill says. "The answer to, would we support it is I still no."

But for those concerned about cost, Otterstrom says that eventually the money saved on diesel would pay for the more expensive electric bus.

"They formally accepted the project into the pre-development phase for the Small Starts grant application process, therefore eliminating any question whether it's classified as a bus rapid-transit system," Rapez-Betty says.

On the 'trolley" label, however, STA shares some of the blame for the confusion. When the plan shifted in 2014, the word "trolley" still remained in some documents.

"We didn’t totally drop the 'trolley' word at the because we needed more confidence with battery technology," Otterstrom says. Now, they have that confidence.

And the direction for planning moved away from "trolley" pretty much immediately, long before the vote a year ago.

"All our cost estimates were assuming there was no overhead wire anymore," he says.

With a formalized Central City Line plan is scheduled to go before the Spokane City Council on April 18, Otterstrom says they're looking to expunge all "trolley" language from the plan, and replace it with "bus rapid-transit."

Once more, everyone together, with feeling: The Central City Line is not going to be a trolley.

“This is very conclusive. This is a bus. A rubber-tire bus. There’s no trolley wire overhead," Otterstrom says. "There’s nobody using 'trolley' to associate with an electric bus.”

(Also, for the record: The Party Trolley? Not really a trolley. )

Mystery of the missing case file: Why did a deputy's bad behavior not turn up in our record request?