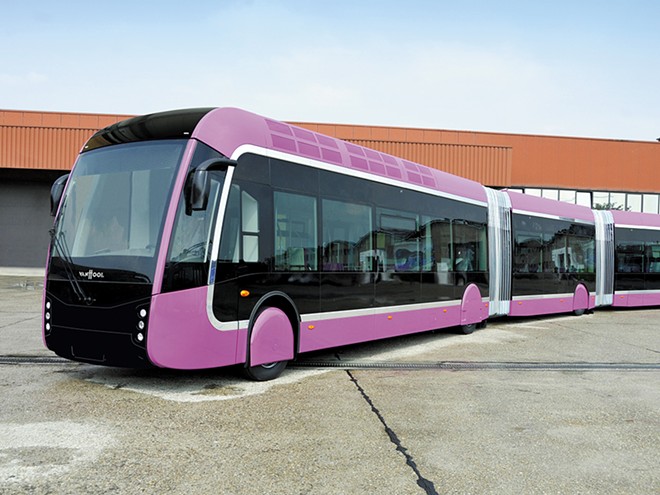 The Central City Line probably won't look like this, exactly, but STA's hoping for a big economic impact along the electric-bus route
With the class-size initiative budget mess cleared from the track, the Washington Legislature moved full steam ahead to approve the last details of the $15 billion transportation package.

And while every local Republican House member voted to oppose it (it came with a 11.7 cent gas tax increase), the package was chock-full of goodies for the Spokane region — $879 million to connect the North-Spokane Corridor to I-90, $8.8 million for the controversial Spokane Pedestrian Bridge, and $15 million for the Central City Line, a six-mile electric bus transit route going though downtown to Spokane Community College.

Wait a moment. Didn't Spokane County voters just recently reject a sales tax increase that would have raised $12 million to pay for the Central City Line? And it's going ahead anyway?

"Losing by 572 votes was not a referendum on STA" or specific projects in its plan, says Meyer. "On the ballot measure, there wasn’t a question about voting for the Central City Line. It was about maintaining or expanding service."

She has actual data to back her up. No, the Central City Line wasn't the big reason why voters rejected the sales-tax increase earlier this year, a scientific survey of voters from Moore Information found.

Instead, the major reason voters voted no was — no surprise — taxes.

So what's happening with the Central City Line, then? The state's $15 million more than makes up for $12 million in capital funding STA's missing out on by the ballot measure failing.

But building the line will take an estimated $72 million.

Here's what STA has allocated so far:

On that front, STA just got good news. The transit agency recently got approval for "project development"  — the work that has to happen before STA applies for the grant — from the FTA.

"It’s a very good sign," says Meyer. "This is validation that the project is eligible as a corridor-based bus transportation project."

It's still a long way off, however. "There's a lot required to get to where we submit the application," Meyer says.

And then there's still the question of how to fund the operating cost of the Central City Line. When STA lost the ballot measure, it didn't just lose out on funding for current projects, it lost out on necessary funding to maintain current levels of bus service.

Eventually, STA will need to decide whether to take another run at a ballot measure shoring up transit funding. But for now, Meyer says, she's given the crop of new STA board members time to get caught up. At STA, funding with all these different sources can get a bit complicated.

Want to learn more about why the STA ballot measure failed? Read the survey results here: