What Mumm meant by saying the STA board had “monkeyed with the numbers,” (and what’s next for STA) 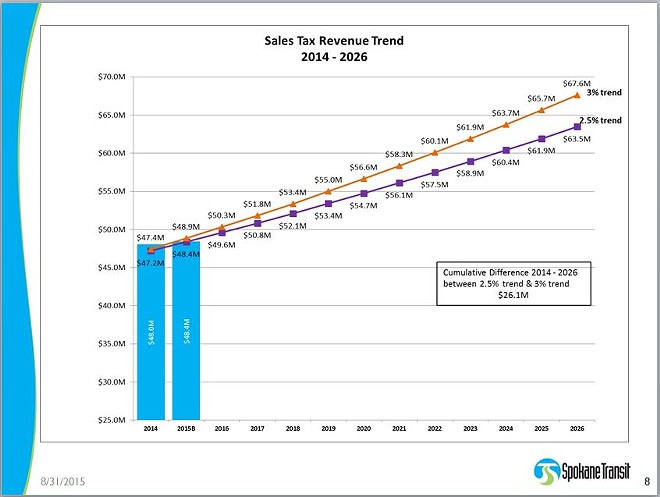 Courtesy of the Spokane Transit Authority
The STA board didn't fake anything. But the assumptions for how fast tax revenue will grow can make a huge difference to their budget

On Wednesday, Michael Cannon, Spokane City Councilwoman Candace Mumm’s former council opponent, chastised the Inlander on Facebook for having never written about Mumm’s statements in January that someone at the Spokane Transit Authority had “monkeyed with the numbers.”

But as STA considers whether to again ask voters for a tax increase – after a proposed three-tenths of a percent increase in the sales tax narrowly failed in the spring – it’s still a very relevant question.

So I listened to Mumm’s full statement and to understand what she was getting at. And no, she wasn’t accusing STA of fraud.

The clip that had been shared on the “8th Man” Facebook page was only a minute long and cut off most of Mumm’s answer. The longer clip cuts off the question Mumm’s replying to, but gave more insight into Mumm’s answer.

“I have to tell you, somebody monkeyed with those numbers,” Mumm said. “The board! This happened before I came on. What they did was, back to those projections you were talking about: The projections, running out trend lines, 30-year-trend lines — standard operating procedure when you’re doing accounting methods — does not go bankrupt. But you know what happens is when you start changing what they call the assumptions, and you say, well, okay, the line goes like this, but what does it look like when you knock off 1 percent increase? What does that do? Well, it tilts the line down. Or what if we add one percent? It tilts the line up. So the board said, we want to be conservative. So let’s just see what it looks like if you tilt the line down one percent?”

I called Mumm and contacted STA to get some clarification, and sat through today’s STA board meeting to get some additional context. In reality, Mumm wasn’t referring to fraud, conspiracy or deceit, she says today. What she was referring to might be kind of boring, but is also pretty important when it comes to budgeting.

It’s all about predictions.

If you’re too optimistic about the future, that’s a problem. You could find your expenses outstripping your revenue and have to scramble to rebalance your books. Promises you made to the public, clients, or children may have to be broken.

But if there are also problems with being too pessimistic about the future. You may miss out on important investments or opportunities to improve the quality of your service.

You can get a pretty decent idea of your revenue by looking at the historical trend. What has your revenue been in the past? How fast has it grown? But a lot of financial managers like to err on the side of caution, projecting a more conservative revenue growth and pouring excess into reserves. That can put their business in a better position should something awful happen like, say, the collapse of the housing market out of nowhere.

So what do you assume? (The Idaho legislature debates this every year as well. In that case, it's the politicians that decide how optimistic to be about the state's revenue growth.)

That’s exactly what STA was doing. The historical growth trend suggested sales tax revenue would grow at 3 percent, but STA was only assuming sales tax would grow at 2.5 percent annually. That sort of move is not unusual, but Mumm disagreed with it.

“The previous board made the decision to under-project historical sales tax revenue and over-project expenses,” Mumm says.  “So what would happen is that at the end of the year, there would be a lot of reserves.”

I reached out to Brandon-Rapez Betty, an STA communications specialist who was also at that community forum, and he confirmed Mumm’s interpretations of her remarks.

“In my opinion, Councilwoman Mumm used an unfortunate choice of words to describe her disagreement with the rate at which the STA Board of Directors chose to project local sales tax revenue,” Betty wrote in an email. “Her point was that the STA Board’s decision to forecast using the lower number restricts the agency’s ability to project the amount of service it can provide.”

Looking back, she says, “monkeyed” wasn’t quite the right verb. “Adjusted” might have been better. And she said her characterization as one projection as “fake” and one projection as “real” was not accurate. Neither number was fraudulent. Asked if she thought it was an attempt to swing this spring’s ballot measure to ask for a 3/10ths of a percent sales tax increase, Mumm didn’t think so.

“I really think it was a holdover from the recession,” Mumm said. “I don’t think the board was doing anything to try to impact future decision making.”

Spokane Valley Councilman Ed Pace, a fan of the STA’s efficiency but not of asking for taxes, was not as generous in his reading of the STA board’s intent.

Just as specific population projections can be used for land-use decisions, revenue projections can impact policy as well. “I think the intent was to manipulate people to voting for a tax increase,” Pace said. “Because then they could say look we’re going to run out of capital sooner than we’d like, then we can increase taxes. I don’t call it unethical, I just think it’s political game-playing.”

Neither Pace nor Mumm were on the board when the 2.5 percent growth number was adopted. Al French, voted yesterday to once again be the chair of the STA board, says there was a very good reason for erring on the side of being too conservative.

“If you overestimate your tax revenue, and put buses out there that you can’t sustain, then at some point you’re going to end up have to eliminate them, after people have adjusted their lives,” French says. “You’d be surprised how many people rent homes, buy homes, based upon access to public transportation. When they make those kinds of decisions and all of a sudden the bus goes away, you’ve impacted their life pretty dramatically.”

When I mentioned the “monkeyed with those numbers” controversy to French he pantomimed banging his head against a nearby wall.

Over the past year, meanwhile, there’s been a lot of debate over what that number should be. Many of the board members met with their financial advisors, Mumm says, about whether a more optimistic number would be appropriate. And at the same time, the economy started looking  better.

“We now have rosier numbers,” Mumm says. “We have more tax revenue. Expenses are lower. Gas [prices] are lower.” Not only that, but the legislature passed a transportation budget pouring more funding into transit projects in Spokane.

In October, the board voted to start assuming revenue would grow at 3 percent annually with the 2016 budget.

“We are adjusting our forecast to be more in line with the historical trend,” Mumm says.

And with that trend, STA calculates they could do everything they’ve laid out in their “Moving Forward” plan with a two-tenths of a percent a sales tax increase, instead of the three-tenths percent increase that failed last spring.

At today’s STA board meeting, the board began debating whether to ask voters, again, for a sales tax increase, and how much of an increase to ask for.

“I’m more comfortable with the idea of doing two-tenths [of a sales tax French said. “It is a more streamlined package of offerings today, than it was to eight, nine months ago… Let the voters tell us.”

“We’re already being taxed to death,” Pace said, though after praising STA’s efficiency as an agency. “For those of us on fixed incomes especially, enough is enough. Our citizens have already spoken: No more taxes.”

Not only that, but explaining to voters they’ll get the same deal for a smaller tax increase could require a complicated explanation.

“So why did we go for three-tenths?” Hafner brought up, spurring French to remind him they’d changed their projections. “People will ask that same question. We will have to make that clear.”

The STA board also asked the STA staff to analyze how much they could get for a one-tenths of a percent sales tax increase.

THIS WEEK: A Festivus miracle, Campbell House Holiday and lots of local tunes