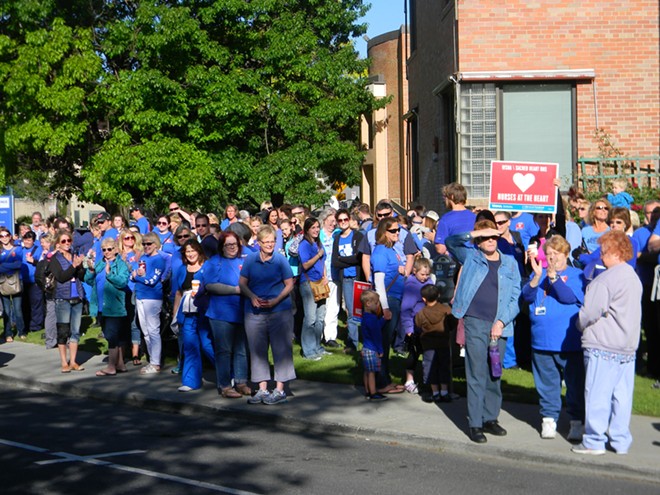 Jake Thomas
Nurses and their supporters gather in a show of solidarity at Providence Sacred Heart Medical Center.
Over 200 registered nurses and their supporters made a gesture of solidarity Tuesday morning outside of the administrative offices at Providence Sacred Heart Medical Center, intending to reinforce their demands in an ongoing labor negotiation.

The nurses, represented by the Washington State Nurses Association, have since December been in negotiations with Providence over a new contract. Outside the building, supporters honked their horns at the nurses, who crowded together wearing blue shirts with an emblem of a heart and the words “Nurses at the Heart.” The crowd broke into cheers as a group marched into the building to deliver a petition signed by community members supporting the nurses.

Deborah Perry, a nurse on the negotiating team, says the two sticking points in the negotiations are over medical benefits and staffing levels. She says Providence wants to reduce dental and vision benefits included in the nurses’ health plan. The last contract negotiation three years ago left nurses with a high deductible and more out-of-pocket costs in their health plans, says Perry.

“It has saved the hospital 40 percent for each employee and it has cost us up to $3,600 a year,” says Perry. “That is hard. So what happens is that people don’t seek medical care until they are very sick.”

Perry says that Providence is seeking language in the new contract that would allow it to make further modifications to existing medical benefits at will. Making these changes in mid contract, says Perry, would leave the union with little bargaining power.

“When I have neighbors who are working on computers or working as plumbers who have better healthcare than myself when I work for Providence, that’s disheartening,” says Clint Wallace, a nurse who says he’s seen the union agree to cuts in retirement in the past. “I feel like our employer is not showing the respect we deserve. As a nurse I feel like we are the backbone of the hospital.”

The other remaining issue, says Perry, concerns staffing levels. The union wants staffing levels to be at levels it says are necessary to ensure patients are cared for adequately while nurses can take breaks and days off. Wallace says that there are currently 100 job listings at Providence and that nurses are always short-staffed and have to work long hours.

Paula Sage, another nurse, says that staffing levels also matter because a lack of staff can put nurses in dangerous positions, including being possibly assaulted by a patient. If a patient isn’t adequately cared for because of a lack of staff, she says, a nurse could be disciplined or lose their license.

“At 3 o’clock in the morning there’s not a doctor to take care of you,” she says. “It’s a nurse who monitors you. We’re your safety net every single night.”

Currently, both sides have renewed the existing contract while a new one is being hammered out. Tuesday was the first day both sides met with a mediator. Providence, citing the sensitive nature of the negotiations, didn’t make anyone available for an interview. But it provided a statement from Mark Smith, director of human resources:

“Both sides have been working hard to reach an agreement, and we are continuing to make progress in our discussions on open issues. To help us reach final agreement on the terms of a new contract, both parties requested a federal mediator to join our bargaining sessions. We look forward to continued, productive discussions with the mediator and WSNA’s bargaining team.”

Who wore what - Sasquatch! 2016 fashions