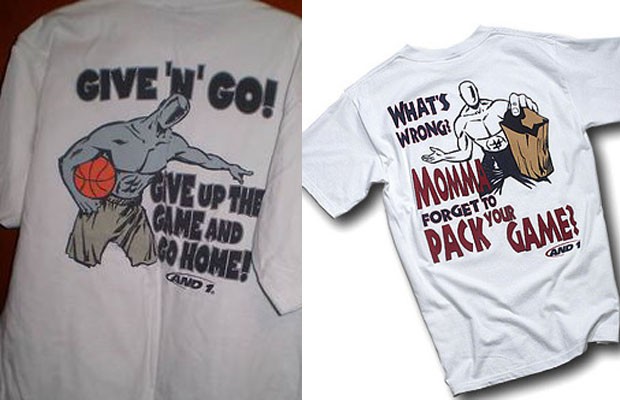 "You're like an AND 1 T-shirt. People thought you were cool back in the '90s, but, in retrospect, everyone realizes you're pretty lame."

It's time once again for Hoopfest,  considered worldwide to be the Bloomsday of basketball. Remember, sportsmanship is such an important value of Hoopfest, they got McDonald's to sponsor it. And yes "intimidating or verbally attacking a tournament official, player or spectator may lead to the removal of that player, team and/or spectator from the tournament."

But we also understand that, in truth, all is fair in Hoop and war. And when your blood starts pumping and the Jock Jams start thumping, no jury in the world would convict you if you happen to drop a killer diss to utterly destroy your opponent's will to live.

Here at the Inlander Trash Talk Lab, our top scientists have been spinning our centrifuges, refining weapons-grade insults to devastate every single team you come across. Please know that these should only be used by a trained insult professional and, even then, should only be used in the Spirit of Hoopfest:

1. “They should call you cribbage, ‘cuz of all the holes in your game.”

2. “No wonder Washington state has the highest rate of property crime in the nation — just look at me steal.”

3. “They call me the Servicemen's Readjustment Act of 1944 because I’ll take you to school for free.”

4. “Are you a lobbyist for the National Chicken Council? No? Because you keep whining about some stupid foul.

5. “This is like the always-online 2013 SimCity reboot when Electronic Arts’ servers went down at launch: You try to play, but you ain't got no game.”

6. “I'm like a property already vested under Spokane County’s Urban Growth Area expansion — cuz’ no matter what you do, you can’t take me out of the zone.”

7. “Dude, your shots are like all my Facebook messages to my ex-girlfriend — desperate, pathetic, and every one of them gets blocked.”

8. “Can't buy a bucket! Puts up a brick! Rejected! The nail in the coffin! Ugly shot! Boomshakalacka!”

9. “You play like my favorite Star Trek: The Original Series episode – you got ‘Trouble with Dribbles.’”

12. “Bro, you’re like a Lilac Princess caught with a DUI — you don’t belong on the court.”

13. Say nothing, but reach deep into your pockets and just start flinging dozens of mouthguards at your opponent*

14. “I’m like a modern day Kareem Abdul-Jabbar. I was pretty great 40 years ago, but now I’m better known for my incisive takes on racial issues in Time magazine.

15. “They call me Dale Chihuly, from the gorgeous way I use the glass.”

16. “I have your family. If you ever want to see them again in one piece, forfeit this game and deliver $500,000 in unmarked non-sequential U.S. bills to the drop-off point by sundown. No cops."

19. “Call me MacBeth, ‘cuz I’ll straight up murder you anytime you try to be Duncan.”

20. "Yo momma’s so fat, she really reminded me of this week’s This American Life episode, ‘Tell Me I’m Fat,’ which explored the complicated nuances of the 'fat acceptance’ movement through Lindy West's powerful new book Shrill: Notes from a Loud Woman. And so while I still am seriously concerned for the health of the morbidly obese, like your mother, I understand far better the plight that she faces and that my vile, albeit killer, insults directed toward her considerable girth won't encourage her to eat less or exercise more, but rather will foster a destructive sense of self-hatred in her while simultaneously contributing to the deadly sociological construction of Western contemporary beauty standards that consider your fat mother unattractive."

22. "Me? I'm  Ernest in Slam Dunk Ernest, while you're Ernest in Ernest Scared Stupid."

23. "The way I shoot, they call me naan bread. Because I'm not quite Curry — but I'm pretty damn close."

24. “Does it hurt? The void in your life that you’re trying to fill with this basketball game. Even if you win, will your victory in a three-on-three basketball tournament make you truly any happier? Maybe for a brief moment, but after that? Will it make others respect you? Will it make your son speak with you again? Will it make your ex-wife love you again and decide to leave Carl? Will it make your job less of a mindless and soulless?  Will it allow you to sleep without painkillers? Will it let you look in that mirror in the morning and see anything but a weary husk, long ago drained of any talent or energy or purpose or drive? Or is a ball in a hoop nothing more than a ball in the hoop, and a ball in the hoop is a drop in the bucket in your life of emptiness and failure?

THIS WEEKEND IN MUSIC: Paradiso, Hoopfest and Riff Raff

EWU cuts tuition for the second year in a row