Be proactive about the fall of ISIS, don't joke about black genocide, and other useful lessons from today's news

Bach this Way
• Zuill Bailey is giving a Flash-Bach performance today in the atrium of River Park Square.

Give the Law A Longer Arm
The Spokane County Sheriff's Office has the funds to hire a few more deputies. Let 'em know if you're interested. [KREM]
click to enlarge 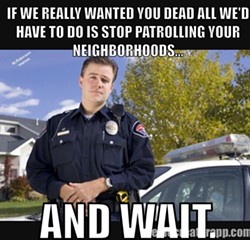 Do you think this meme is appropriate for a Kootenai County Deputy Prosecutor to be sharing approvingly? Discuss amongst yourself

As a General Rule, Avoid Racist Genocide Jokes
Tensions are pretty high right now between law enforcement officers and black citizens. So a Deputy Prosecutor in Kootenai County though it might be a fun idea to share a Facebook post (pictured to the right) reading "if we really wanted you dead all we'd have to do is stop patrolling your neighborhood... and wait."

"Great point," this representative of the criminal justice system added, in his nuanced way. "Where the police are under attack from politicians, and the police become less aggressive, the murder rates go up. I say, let them have their neighborhoods. They will be like Rwanda in a matter of weeks."

Lest you think he didn't understand both sides, he described the Black Lives Matter movement as having "a gang mentality." [CDA Press]

No Caliphate can last forever, so make the most of the one you have
ISIS is already preparing for their military defeat of their kingdom of terror.