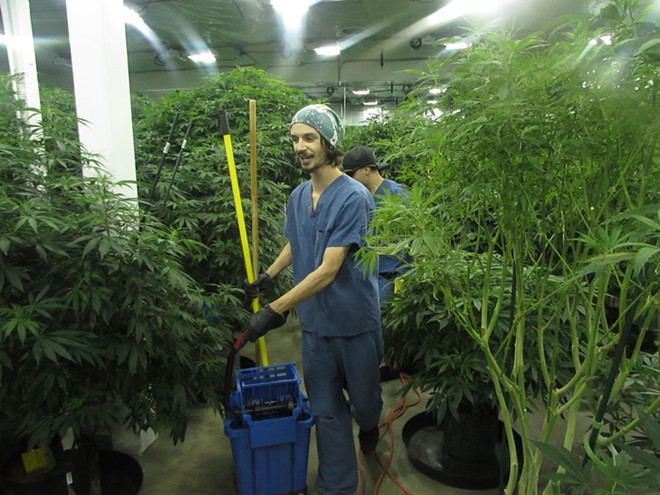 Wilson Criscione
An employee at Grow Op Farms, a marijuana producer-processor in Spokane Valley
Spokane Valley has passed an ordinance that prohibits new marijuana retail stores but will allow new growers and processors.

The decision means the moratorium that had been in place on any new marijuana licenses has been lifted. Tuesday's ordinance, which amends city code, keeps the ban on new retailers, but production facilities will now be able to expand or move subject to state and local buffering restrictions.

That includes Grow Op Farms, which claims to be the largest producer-processor of retail marijuana by volume in the state. Rob McKinley, co-owner of Grow Op Farms, told city staff and council last week that the indoor farm was unable to expand any more because of the moratorium that had been in place since October 2015. With the moratorium being replaced by this amendment to city code, that will change.
"We don't really have any more space," McKinley told council. "We're maxed out to the ceiling."

According to deputy city attorney Erik Lamb, there are 21 licensed producers and 25 licensed processors in Spokane Valley.

The three pot retailers currently in the Valley won't be prohibited as part of the change to city code. But if they decide to move, then they will be still be subject to local and state buffering restrictions. Producers, processors or retailers cannot be located within 1,000 feet from any public schools or public libraries, for example.

On Tuesday, councilman Sam Wood expressed his desire to add a restriction that would prohibit marijuana businesses from locating within 1,000 feet of any church or hospital property.

"I would like to see two things added to the buffers: churches and hospitals. That's what I'd like to see done," Wood said.

But councilman Ed Pace said he didn't see how adding more buffers around hospitals and churches would make a difference.

"I think we already have a well-thought-out, good set of buffer zones around parks, schools and that kind of thing," Pace said. "And when you combine that with the limit of three retail stores, that's restrictive already and does what most of us wanted to accomplish."

What the council wants to accomplish, Mayor Rod Higgins has told the Inlander, is not to have retail stores "proliferate" in Spokane Valley while also allowing producers to work in the Valley.

City Council voted to pass the amendment, with Wood casting the only "nay" vote. The city may look into adding buffers around churches and hospitals at a future date.

A Kootenai prosecutor suggests police should give up on minority neighborhoods