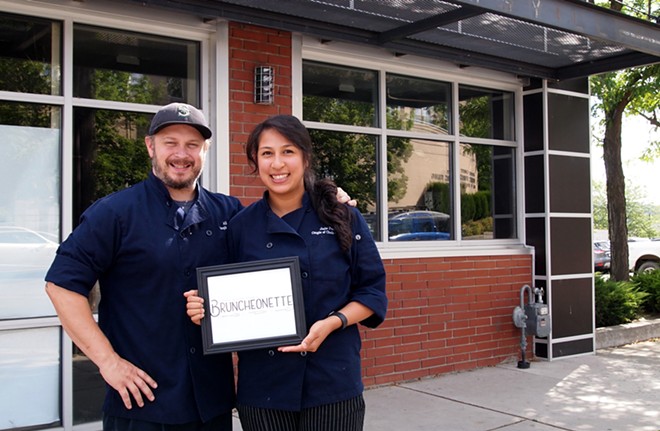 Couple of Chefs co-owners Allen Skelton and Joile Forral outside the future home of their new brick-and-mortar restaurant Bruncheonette, scheduled to open this fall.
The ever-expanding culinary scene in Spokane will get a new entry this fall from an old favorite, as the folks behind Couple of Chefs Catering & Food Truck will open Bruncheonette, a "casual-dining gourmet brunch restaurant."

Husband-and-wife team Allen Skelton and Joile Forral started Couple of Chefs in 2011, and their food truck was voted the best in the Inland Northwest by Inlander readers in 2016. Bruncheonette will expand upon the menu available in the truck to include a small selection of liquor, local craft beer, wine and cider, and will focus on made-from-scratch dishes, Forral says.

Their goal is to open the space at 1011 West Broadway in September. That's the former Knockaderry bar space, and Forral says the plan is to expand the prep area a bit so the restaurant can act as home base for the continuing catering and food truck aspects of the business. Otherwise, just a few cosmetic changes to the place should get Bruncheonette ready to launch. As of now, the plan is to be open seven days a week for breakfast and lunch.

A brick-and-mortar restaurant was Step Three on the couple's business plan for Couple of Chefs, following the catering and food truck aspects, but after searching for a good space for months, "we had actually decided to stop looking," Forral says, since the summer is such a busy season. Naturally, that's when a prime spot opened they could use.

"[Breakfast] is the food that we really like to make," Forral says, hence the focus to expand on the to-go breakfast items — breakfast sandwiches and burritos — currently available in the truck.

The move was made possible through a loan by Craft3, a regional nonprofit that provides loans to Washington and Oregon small businesses and nonprofit organizations.

Passion, plagiarism at Republican National Convention and other morning news