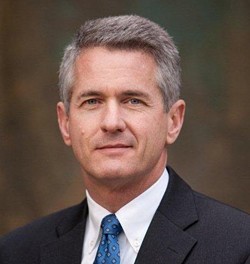 Barry McHugh
Kootenai County Prosecutor Barry McHugh said yesterday that one of his deputy prosecutors will not be punished for his racially charged social media comments.

McHugh was on vacation when the Deputy Prosecutor Bryant Bushling's comment surfaced.

"Over the time Bryant Bushling has worked in this office, I have had many hundreds of conversations with him about evaluating criminal cases, charging criminal cases, resolving those cases, and making recommendations at sentencing," McHugh told the Coeur d'Alene Press. " Not once have I questioned his use of appropriate factors in making decisions. He is a rational, fair and highly ethical attorney with a distinguished career of over 30 years as a prosecuting attorney. The posts will have no impact on his continuing ability to provide excellent service to Kootenai County."

We wrote about Bushling's comments in a blog post last week. That post is pasted below, ICYMI:

Kootenai County bailiff Todd Hartman posted a controversial meme on his Facebook page this week. Over the picture of a white police officer, the text reads: "If we really wanted you dead all we'd have to do is stop patrolling your neighborhoods...AND WAIT."

"Great point. Where the police are under attack from politicians, and the police become less aggressive, the murder rates go up. I say, let them have their neighborhoods. They will be like Rwanda in a matter of weeks."

Bushling says his comment, which drew criticism online, was misinterpreted. He has since edited it:

"If you have never qualified as a gang expert in court, have not interviewed hundreds of gangsters and those terrorized by them, have never walked gang-infested streets, have not attended numerous hours of gang training, have not handled 100s if not 1000s of gang cases, have never participated in gang raids and seen these thugs in their environment — in short, you know nothing — but feel the need to comment on my posting without first asking me, then you are just an insignificant slithering coward."

When contacted by the Inlander, Bushling said he regrets his wording, adding that his perspective is shaped by prosecuting gang-related cases in Los Angeles for 12 years. He's spent five years as a deputy prosecutor in Kootenai County.

"I know gangs very well," Bushling says. "And it's a mentality that you can't understand until you experience it. People will kill other people over the color of their shirt."

He adds that he sees at least one parallel between the Black Lives Matter message and the gang mindset, which is the narrative that police are inherently racist and are targeting black people.


"This is another example where an individual makes a very serious mistake of stereotyping."


✖
Bushling has not faced any blowback from Kootenai County Prosecutor Barry McHugh, who is on vacation this week. But Tony Stewart, founding board member of the Kootenai County Human Rights Education Institute, says it will be interesting to see how McHugh reacts. Perhaps a public apology is in order, Stewart suggests.

"This is another example where an individual makes a very serious mistake of stereotyping," Stewart says. "We're going through a very difficult time, and what one must not do, especially those in positions of responsibility, is allow extremists to divide us based on race or religion or any other difference."

Following a week where the country watched as two black men were killed by police in Louisiana and Minnesota and a sniper targeted white police officers in Dallas, police and other public officials vented their frustration on social media. Some called for peace and dialogue but others positioned themselves squarely on one side or the other: Black Lives Matter or police.

In an age where interaction on social media can lead to real life results, some officers were fired, demoted or suspended. In comparison to some posts from around the country, Bushling's comment is somewhat tame.

A detective in Detroit was demoted and is currently under internal investigation after his comments about the Black Lives Matter movement went viral. 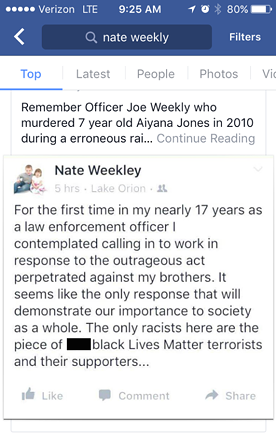 A cop in Overland Park, Kansas (near Kansas City), was fired after posting a threatening message on a Dallas woman's Facebook picture of her daughter:

"We'll see how much her life matters soon. Better be careful leaving your info open where she can be found :) Hold her close tonight it'll be the last time."

And a firefighter in Savannah, Georgia was fired for a post including the N-word and "white power."

Some agencies are refusing to identify officers who've been fired or suspended, while other departments as a whole took to social media to condemn the Black Lives Matter movement.

A post on the Fort Worth Police Officers Association Facebook page, which has since been edited and then deleted, referred to the movement as "an organization that chooses to MURDER American law enforcement officers."

And on the other side of the state, the head of the Seattle Police union resigned after his comment on the Seattle Police Officers' Guild Facebook page. The post has been since deleted, but it read:  "Dallas PD and their officers are in our thoughts and prayers ... The hatred of law enforcement by a minority movement is disgusting ... Heads in swivels brothers and sisters ....#weshallovercome."