An initiative that would raise the state’s minimum wage to $13.50 over the next four years while giving Washington workers paid time off to deal with illness has qualified for the November ballot. 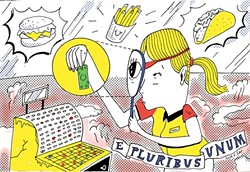 On Friday, the Washington Secretary of State’s office announced that its Elections Division had completed its random sample of the 345,907 signatures turned in for Initiative 1433  and found “that the measure easily exceeded the bare minimum of 246,372 valid signatures needed to qualify for the ballot.”


“This issue crosses geographical and political divides,” said Carlo Caldirola-Davis, campaign manager for Yes on 1433, in a prepared statement. “When voters hear about Yes on 1433, they know it's good for our workers, our families and our economy.”


The measure, if passed, would allow workers to accrue paid time off at a rate of one hour for every 40 hours worked. Employers would be required to start offering the benefit to employees 90 days after they start work. The time off can be used to address domestic violence, and injury. It can be used for mental and preventative health reasons, as well as to care for a family member.


The other provision of the initiative will phase in an increase the state’s minimum wage from its current $9.47 an hour (already one of the highest in the nation) to $13.50 by 2020. After that, an annual cost-of-living adjustment will kick in.


Earlier this year, Spokane City Council President Ben Stuckart and his allies passed an ordinance requiring most employers to offer their workers paid . Under I-1433, employers can cap the amount of sick time accrued by employees at 40 hours. The city of Spokane’s ordinance also allows employees to accrue 40 hours of but contains exceptions for smaller businesses and exempts the buildings trade industry.


So what does Stuckart think about an initiative that would be broader than his ordinance?


Stuckart says that although city council tailored its sick-leave law specifically for Spokane, he says the biggest criticism he’s heard against the ordinance is that it would better be addressed on the state level.


“If we wouldn’t have passed it, I don’t think we would have forced the issue,” he says.


Previously, Stuckart has also indicated he’d be open to increasing the minimum wage in Spokane to $11 or $12 an hour, lower than Seattle’s $15. When asked if he was concerned that the $13.50 minimum wage mandated by the initiative was inappropriate for Spokane, he said it would just make it more important for the city to attract new companies and raise median income.


The Association of Washington Businesses responded with a statement criticizing I-1433 for sounding good but being loaded with “unintended consequences,” particularly for first-time job seekers. According to the statement, the AWB and other business groups would have preferred the issue to be taken up by the legislature.


"We want to create opportunities for everyone to succeed without jeopardizing job retention and growth, particularly in rural communities,” said AWB President Kris Johnson, in a prepared statement. “For us, that means support for entry-level jobs and recognition of other compensation that employers already provide like healthcare, and scholarships. Business owners want to see their employees succeed and care about giving people the opportunities that were once given them."

Trump nominated, bus fare hikes and other headlines as you end your week