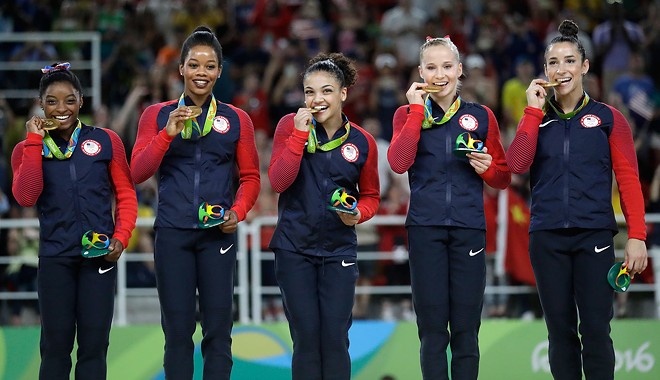 nbcolympics.com
Simone, Gabby, Laurie, Madison and Aly celebrate their team gold win in Rio.
The Final Five have fulfilled their destiny, living up to everyone's lofty but entirely realistic expectations of becoming team gold medalists in the 2016 Olympic Games in Rio.

Tuesday, while most of us were busy at work, the unstoppable quintet of Simone Biles, Aly Raisman, Gabby Douglas, Laurie Hernandez and Madison Kocian displayed impeccable performances, finishing more than eight points ahead of the silver medalists from Russia. (Click this link to watch routine recaps for the team if you missed any of the action.)

NBC commentators expressed ceaseless amazement during the competition, event after event, in which the five women continued to outperform themselves compared to their qualification routines just two days earlier. (Check out this sweet feature from the New York Times to see how they pulled it all off.)

With the team gold locked in, next up this Thursday (streaming live starting at noon Pacific Time, with a tape delay airing during NBC's prime-time Olympic coverage) the Greatest Gymnast of All Time, Simone Biles, along with her teammate and now two-time Olympic team gold medalist, Aly Raisman, will vie for spots on the podium in the women's individual all-around competition. (Only two team members per country can compete for the all-around event, which means that even though she placed third overall, 2012 all-around gold medalist Gabby Douglas won't be able to defend her title).

Individual event finals — offering medals for the top three performers each on the vault, uneven bars, balance beam and floor exercise — begin on Sunday at 10 am PT. From Team USA, Biles will compete for individual medals on floor, vault and beam. Raisman will compete on floor, Hernandez on beam, and Kocian and Douglas on bars.

Considered by many to be the best women's Olympic gymnastics team ever assembled, the Final Five (their nickname pays tribute to the fact that they're the last group to be led by legendary coach and national team coordinator Martha Karolyi, who plans to retire before the next Olympics) have left all of us starry-eyed, mind-blown and speechless over their unmatched physical prowess.

While performing the most difficult skills ever imagined in gymnastics, their execution is nearly flawless. By posting the highest scores on each event, Team USA kept themselves so far ahead of their international competitors — teams from Russia, China (which took bronze), Japan, Great Britain, Brazil, the Netherlands and Germany — there was no hope for anyone to catch up. By the time they'd reached their final and strongest event, floor exercise, the commentary team joked that the three performances from Hernandez, Biles and Raisman were a victory dance. 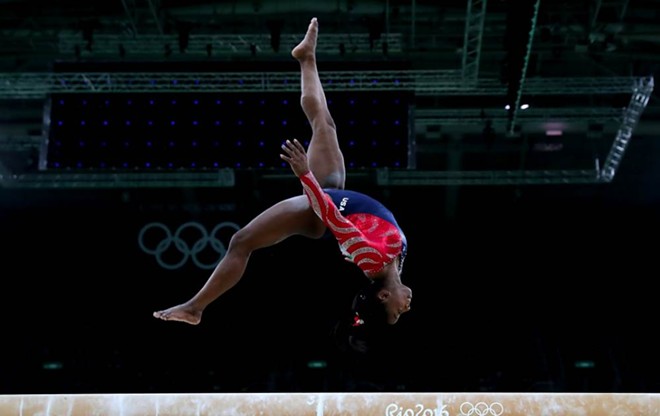 nbcolympics.com
Simone Biles flawlessly flipped her way to team gold in Rio.
While the medal winning is surely not over for these five unstoppable athletes, gymnastics fans in the Inland Northwest should be looking further out, making plans to see these Team USA members live when they head to the Spokane Arena next month.

The Kellogg's Tour of Gymnastics Champions brings past and new Olympic champions to Spokane on Sept. 15 for an exhibition-style show. Names currently on the confirmed cast list include 2016 team members Biles, Raisman and Douglas, along with 2008 Olympic champion Nastia Liukin and 2012 gold medalist Jordan Wieber. Other members of the 2012 and 2016 Olympic teams are also expected to perform.

The 36-city tour kicks off in Spokane, less than a month after the Rio Games' closing ceremonies.

CORRECTION: This story has been corrected in its reference to the women's team nickname, the Final Five, to reflect that the name doesn't solely refer to the fact that in the 2020 Games, teams can only consist of four gymnasts.