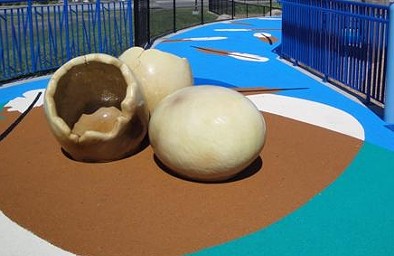 City of Spokane Valley
People think it's fun to take these eggs from their home.
A giant, fiberglass egg that children play on has disappeared from Discovery Playground in Spokane Valley.

This is the third time at least one of the eggs has been stolen since the playground opened in 2010, and park officials are getting frustrated.

"It's very frustrating and it's disheartening, because every time they are taken it creates a real void. This is one of the areas people like to play on and use," says Mike Stone, Spokane Valley Parks and Recreation Director.

In 2010, two eggs were taken but then spotted by a citizen and returned. Then, a month ago, all three eggs were stolen by a group of minors before one of the kids posted a picture of a giant egg on Instagram. In that case, the city got a hold of the parents, and the eggs were returned, Stone says.

This time, only one egg was taken — the one that wasn't made to look broken, Stone says. It was discovered to be missing Thursday morning. As of Friday, there are no leads as to who took the two-foot-high, cream-colored egg.

A police report has been filed, but Stone is hoping someone from the community will once again identify the egg-thieves so it can be returned to the Eagles' Nest play area. The eggs are typically bolted to the ground and anchored in concrete, so Stone suspects it had to be a group of people who lifted it up and carried it away.

The three eggs cost about $9,000 total when the playground was built, Stone says.

This has been a rough year for vandalism in Spokane Valley parks, according to Stone. People have been setting fires in public restrooms, carving and damaging picnic tables and using graffiti. And now, another egg theft.

"It's been a very tough year," Stone says. "I've been in this business long enough, you go through periods of depression, frustrations, trying to figure out what the motivation is and why these things are happening ... we're not happy."

Anyone with information should call the Spokane Valley Parks and Recreation Department at 509-688-0300 or email parksandrec@spokanevalley.org.