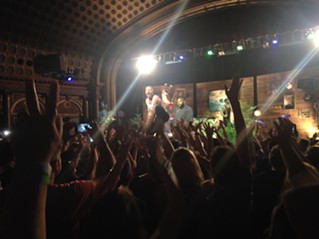 Good morning Spokane and welcome to the day after Macklemore and Ryan Lewis hit your town to open their Camping Trip tour. And no, those massive dirt ditches surrounding the Bing Crosby Theater are not result of the mayhem that hit that block last night, but it's understandable that you'd think as much.

What I expected to be a simple hip-hop show at an intimate venue turned out to be an all-day hullabaloo in downtown Spokane, where fans were lined up by mid-morning to get a good spot in the pick-your-own-seat show. By 2 pm, T-shirt stands were set up outside the Bing and a few hours later Macklemore and Ryan Lewis appeared to sign gear. 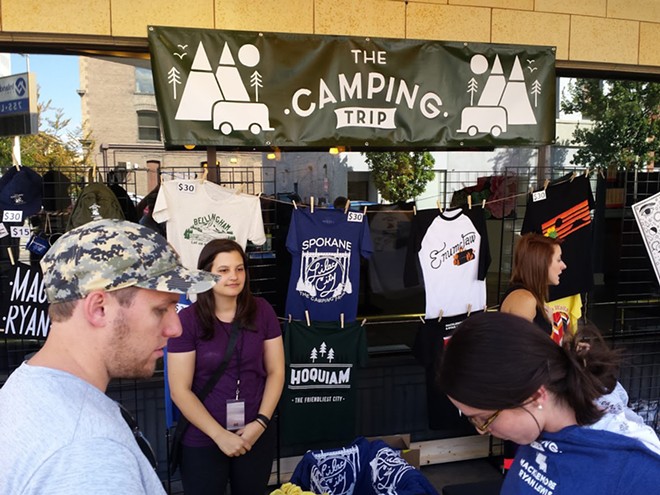 Note, this was still a good three hours before the show was set to begin. With Fitz and the Tantrums nearly selling out the neighboring Knitting Factory, the entire block, and the surrounding bars and restaurants were jam-packed on this rare celebratory Tuesday night.

OK, so after standing in line for a thorough security pat-down, the masses who'd snagged a ticket for this gig that sold out in a matter of minutes when it was announced back in May finally got closer to answering the question: "What the hell is this Camping Trip thing?"

We knew it was a string of shows in smaller towns in Washington at mostly historic theaters and that this was notable because Macklemore and Lewis have just returned to the states after playing stadiums in Europe. But that was about it. Inside, though, we got a look at the log cabin stage motif, decked out with trees and a spartan DJ set-up.

After opening sets from Seattle MCs Dave B and Xperience, an anxious crowd that included a surprising number of young children (considering the late start time and that, ya know, there were F-bombs aplenty because Macklemore is a hip-hop artist and not exclusively a Sesame Street cast member) crowded the stage.

Soon, Spokane native Ryan Lewis, decked out in a Seattle Supersonics hat (RIP), hopped on stage and pumped up a crowd that needed no pumping. Then Macklemore came out out and — get this, you guys — he cut his hair. Macklemore no longer has the Macklemore hair cut. He basically shaved his head. We have not yet checked in with local hair salons to see how many dudes have rushed in this morning to get their floppy high-and-tight dos hacked off.

Macklemore and Lewis played the hits, as expected, with a noticeably scaled-down approach. We heard "Thrift Shop" and "Same Love," as well as several cuts from this year's This Unruly Mess I've Made including "Downtown." Of course, they played "Downtown," dude.

There are a lot of Macklemore naysayers out there and I've been guilty of some heavy eye-rolling at times, but you can't come out of these guys' shows without feeling like it's all authentic, even if there's some corniness mixed in. Both Lewis and Macklemore spent no shortage of stage time professing their love for Spokane and you have the feeling that they won't do the same at, say, the Bellingham or Walla Walla shows.

Macklemore did say that his love for Spokane "might just be because of the Arby's sign with the big-ass hat that just makes me hungry." And that's not the greatest endorsement, but there was a lot of heartfelt love for the region, where the act filmed their epic "Downtown" video and also recorded a bulk of their album. 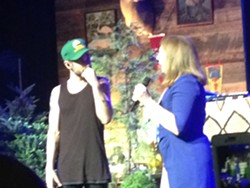 City Councilwoman Candace Mumm present Spokane native Ryan Lewis with a key to the city — an honor that was also once bestowed on Ted Nugent, but whatever. He wore around his neck for the bulk of the show with pride, as he should.

He also got a very official looking framed plaque. To the right is a really blurry photo of this important civic moment.

If you ever wanted to feel pride in your city, this show did it for you, even if a certain state senator took the opportunity to slam Macklemore for some reason.

Dear people, no need to pretend you like Macklemore's awful music just because he's from our state. Hope that helps. #soccermomhiphop

The Spokane love wasn't the only lesson in civics Mack and Lewis delivered. There was a long talk about taking care of each other as a society, which included the rapper acknowledging that "F*** Donald Trump" is a sentiment he can get behind. Then, later, there was a long talk about Black Lives Matter, which got a roaring response, even if it may have come as unexpected to the mom or dad who accompanied their tweens to the Bing.

With the clock approaching midnight, the gang returned for an encore and despite the late hour, the assembled Mackle-lovers showed no sign of slowing when they launched into "Downtown." Here's a bit of that.