Monday Morning Place Kicker: How to talk to your football-obsessed friends and coworkers

Seahawks.comm
Doug Baldwin makes the winning catch for the Seahawks on Sunday.
With fall comes that morning chill, those beautiful colors changing in the trees, Halloween decorations at the grocery stores and coworkers spending every Monday morning going over the weekend's football activities and how they affected their favorite teams.

That's where we come in with Monday Morning Place Kicker, our weekly analysis of the weekend sports stuff to help you relate to (or at least converse with) your sports-obsessed boss/cubicle-mate/bus driver.

WHAT YOUR SEAHAWKS FRIENDS ARE TALKING ABOUT TODAY
Well, the home team of the entire Inland Northwest kicked off their NFL season with an ugly game against a surprisingly feisty Miami Dolphins. The Seahawks won the game 12-10 thanks to a last-minute drive and touchdown pass from quarterback Russell Wilson to wide receiver Doug Baldwin.

The big story lines: The Seahawks defense remains awesome, their offense will need some time before it starts clicking, and just how bad off is Wilson's ankle after he hurt it while being sacked by human boulder Ndamukong Suh. The Seahawks travel to LA next week to play the Rams, a crappy team that has inexplicable success against the Seahawks.

Your go-to line for talking to Seahawks fanatics: "Hey, a win is a win, am I right?" 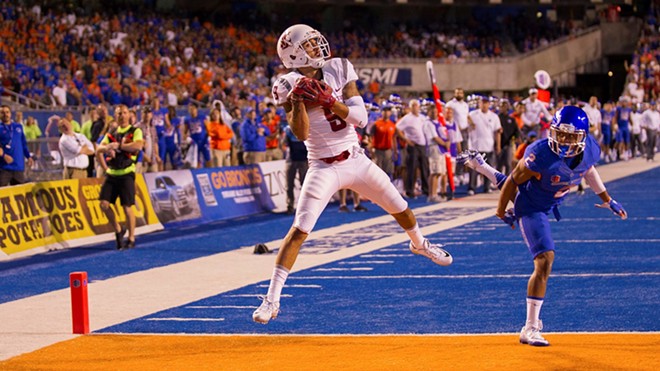 WSU Athletics
Gabe Marks makes a grab vs. Boise State on that obnoxious blue turf.
WHAT YOUR COUGAR FRIENDS ARE TALKING ABOUT TODAY
Washington State came into the season with sky-high expectations, some buzz about a Top 25 ranking and designs on winning the Pac-12 North division. They have now lost their first two games after a shootout loss to Eastern Washington last week and then Saturday's nailbiter in Boise, in which they fell behind fast, then closed to within three points late, and eventually lost 31-28 despite quarterback Aaron Falk chucking it for 480 yards and four touchdowns.

The big story line: While some Cougar fans are no doubt despondent, and ready for the head of coach Mike Leach on a platter, all the team's conference goals are still in play if they get it together. And in playing the University of Idaho next, there's every reason to think they're about to get their first win of the season this Saturday.

Your go-to line for talking to Cougars fanatics: "Hey, at least we play Idaho this week, am I right?" 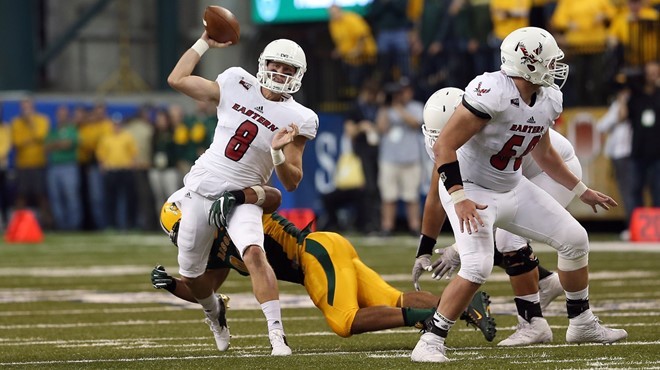 EWU Athletics
EWU quarterback Gage Gubrud dodges a defender.
WHAT YOUR EAGLES FRIENDS ARE TALKING ABOUT TODAY
Eastern Washington went on the road after their stunning win at WSU last week to play against five-time defending FCS champs North Dakota State, and came oh-so-close to a win. The 50-44 overtime loss should do nothing to slow the Eagles early-season momentum, given the foe, and new quarterback Gage Gubrud looks like the real deal, passing for 450 yards and four touchdowns on Saturday.

The big story line: All-world wide receiver Cooper Kupp was injured in the second half and unable to return, and whether or not his shoulder heals — and the team's other injured players get back up to speed — will go a long way in deciding the Eagles game against another top-tier opponent this Saturday when they host Northern Iowa.

Your go-to line for talking to Eagles fanatics: "Damn, I hope Cooper's okay!" 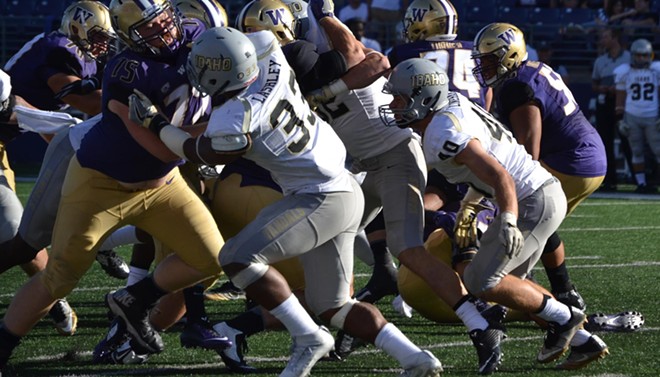 Idaho athletics
The Vandals couldn't hang with UW.
WHAT YOUR VANDALS FRIENDS ARE TALKING ABOUT TODAY
Honestly, they're probably talking about the Seahawks game. The Vandals weren't expected to do much against a Top 10-ranked University of Washington, and they didn't, losing 59-14 in Seattle.

The big story line: Well, redshirt freshman quarterback Gunnar Amos saw some action and scored a touchdown late in the game. Mainly, the Vandals fans are looking ahead for a Palouse showdown at WSU on Saturday.

Your go-to line for talking to Vandals fanatics: "I think we have a chance against the Cougs!"