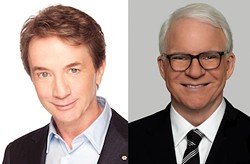 Martin Short (left) and Steve Martin will not be getting wild and crazy in Spokane after all.
Ah, what might have been.

The musical-comedy combo promised by the tour featuring a couple of legends — Steve Martin and Martin Short — looked like it was going to be one of the cultural highlights of fall in the Inland Northwest. Instead, it's one of the biggest disappointments after word came Monday that the show is cancelled.

You'll get an automatic refund if you bought them with a credit card. If you bought tix at a TicketsWest outlet or the INB Performing Arts Center box office, you can take them back to the Spokane Arena box office for a full refund, or mail them to: Spokane Arena, Attn: Ticket Refunds, 720 W. Mallon Ave., Spokane WA 99201.

The announcement stated the show will be "canceled due to scheduling conflicts," which typically means the potential audience members "scheduled" themselves to do something else that night rather than buy tickets for this particular show. For this gig, the cheapest seats were set at $85, with a top price of $350.

It's still a bummer, though, because the combo of Martin and Short promised a night of top-notch entertainment, abetted by bluegrass band the Steep Canyon Rangers, regular collaborators on Martin's music albums and tours.

On the bright side of life: the show featuring Monty Python veterans John Cleese and Eric Idle slated for Oct. 28 is still on.