If you managed to stay awake through Sunday night's Seahawks/Cardinals OT non-thriller, congrats! You witnessed a little history, although not necessarily exciting history. Thankfully there were some better games through the weekend to make up for that prime-time clunker.

Let's break it all down:

Seahawks.com
Even Pete Carroll can't believe what he saw Sunday night.
AND YOU THINK BASEBALL IS BORING
The Seahawks traveled to Phoenix to take on their division rival Arizona Cardinals, and the result was a 6-6 tie — the first tie in Seahawks franchise history! That's pretty much the most exciting aspect of a game that featured a lot of great defense, particularly by the Seahawks against the Cardinals relatively competent offense. The 'hawks, though, looked downright anemic on offense, and quarterback Russell Wilson just doesn't look himself with that leg injury. Oh, and both team's kickers missed potential game-winning chip shots, so that old adage about special teams being just as important as offense or defense certainly rings true today.
The big takeaway: The Seahawks are still in first place in the NFC West, and head to New Orleans for a game against the Saints Sunday.
What to say to your Seahawks-loving friends today: "Of course I stayed awake for the whole game!" 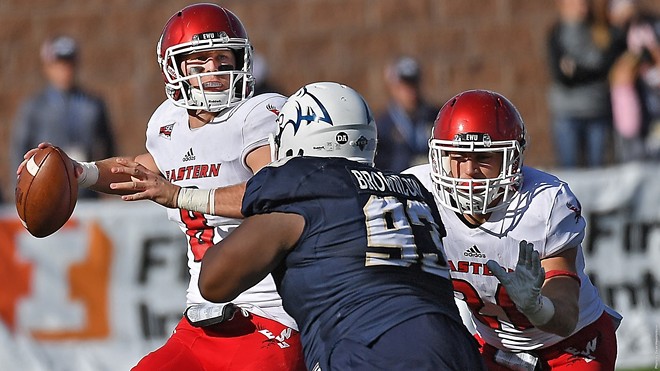 EWU Athletics
Eagles quarterback Gage Gubrud is rewriting the record books in Cheney in his first year.
EWU EAGLES IN COMMAND IN THE BIG SKY
Eastern Washington traveled to Bozeman Saturday and came away with a 41-17 win against the Bobcats. Quarterback Gage Gubrud earned national offensive player of the week honors for throwing for more than 500 yards and four touchdowns. The win keeps the Eagles, ranked No. 3 in the nation, atop the Big Sky Conference, tied with fellow undefeated squads Weber State and North Dakota. EWU plays neither of them this season, meaning they might technically tie for the conference title if they win out, but they'll get a few home games in the playoffs for sure, and that's what counts. On Saturday, the Eags have a home game against Montana, who lost to Northern Arizona Saturday and is suddenly two games behind the Eags.
The big takeaway: If the Eagles can stay healthy, they're going to be rolling into the FCS playoffs with an unstoppable offense. And Gubrud is pretty amazing at quarterback.
What to say to your Eags-loving friends today: "What time are we tailgating on Saturday?"

WSU Athletics
WSU running back Jamal Morrow did some damage Saturday.
COUGS REFUSE TO COUG IT IN THE DESERT
Washington State went on the road to Arizona State and took down the Sun Devils 37-32 in Tempe for the first time since 2001. Luke Falk threw for nearly 400 yards and connected on three touchdowns in the win, despite being pummeled regularly by the ASU blitz. The win didn't get the Cougs into the Top 25, which is a bit ridiculous, but keeps them on track for an Apple Cup showdown for the ages as long as they keep winning. They go to Oregon State Saturday in a game that should have the Cougs heavily favored to win.
The big takeaway: With five games to go, the Cougs still have their destiny in their own hands. If they win out (no easy task, given games lurking against suddenly strong Colorado and Washington), they'll be in the Pac 12 championship game with a trip to the Rose Bowl on the line.
What to say to your Cougars-loving friends today: "I bet we can get free tickets to the game this weekend if we just show up at the stadium."

VANDALS TAKE A LOSS
Traveling to Appalachian State isn't easy, and while Idaho kept it close for much of the game, they ultimately succumbed 37-19. The Vandals are now 4-4 overall, 2-2 in the Sun Belt Conference.
The bit takeaway: The Vandals are still in line to make a bowl if they can win two of their remaining four games. Their final two games of the season are in Moscow, so there could be some excitement in the Kibbie Dome! It's true! The team has a bye this weekend.
What to say to your Vandals-loving friends today: "Should we go to the Cougs game on Saturday?"

Walking Dead, Seahawks, Dakota protests and other news to start your week

Local holiday hijinks to celebrate Halloween throughout this week