WSU suspended a student not on the football team for his role in brawl, too 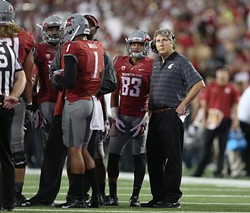 Head coach Mike Leach
Washington State University is facing criticism from a state senator, a former quarterback and advocacy groups for suspending football player Robert Barber after an off-campus fight over the summer that left one student with a broken jaw and another with a concussion.

But it's not only football players who have been disciplined following the brawl. Pedro Diaz, a WSU student who was at the party, tells the Inlander he has been suspended as well.

The university's student conduct process has come under fire in the past week following a story by the Seattle Times that questioned whether Barber was given due process. Barber was expelled in September but was allowed to keep playing in games as he appealed the decision. The university's appeals board reduced the expulsion to a suspension. Barber's WSU college football career is likely over as a fifth-year senior.

Barber's teammate T.J. Fehoko has also been expelled by the school.

Today, state Sen. Michael Baumgartner, joined by former quarterback Jack Thompson, held a press conference hosted by the Asian Pacific Islander Coalition (APIC) urging WSU and university president Kirk Schulz to review Barber's suspension. Baumgartner demanded that the school reinstate Barber and allow him to finish his degree, and he said publicly that he is offering Barber a job in his office if Barber's suspension is upheld. (He did not mention a job offer for Fehoko.)

A representative from APIC was at the press conference and accused the school of not giving Barber, from American Samoa, due process. A petition on change.org has more than 1,800 signatures and calls for "justice" for Barber, claiming he was "racially profiled and targeted" by the university.

There was no mention of Diaz, who says his suspension was handed down on Oct. 21. Diaz says the suspension is effective starting Jan. 1, 2017, and continues until next Dec. 1, 2017.

Diaz is critical of people accusing the school of racial bias because of Barber's suspension. Multiple witnesses identified Barber as the person shown in a cell phone video punching Jackson Raney, a WSU student who suffered a concussion in the incident. Police said Raney was punched once in the head while standing and then a second time on the ground by Barber. "The video clearly shows Robert Barber whaling on my friend," Diaz says.

Police arrested Barber and Fehoko for felony assault after a lengthy investigation into what happened at the brawl, which took place July 23. Whitman County prosecutors tell the Inlander that a charging decision won't be made until December at the earliest.

Diaz and another WSU student, Dylan Rollins, were cited by Pullman police for disorderly conduct. Rollins, reached by phone Monday, says he went through the student conduct process and had to write an essay about how he would have handled the situation differently in the future. Rollins says he was frustrated that he was cited for disorderly conduct because, "I got punched in the face and I got in trouble for it. And I had to go to the hospital."

Following the Seattle Times story that scrutinized WSU's student conduct process, the school posted a letter reaffirming its support of the process on its website. The university has hired a law firm to conduct a formal review of the conduct board processes and develop recommendations with regard to discrimination and bias.

"WSU's standards of conduct for students embody high standards and expectations for all students. The same process applies to all WSU students, regardless of their race, status of affiliation. And that, of course, includes students who are varsity athletes," said Melynda Huskey, interim vice president for student affairs.

In the letter, she pointed out that these are not criminal proceedings.

Baumgartner, according to the Spokesman-Review, said Monday that "universities are there to educate people. Unless there is a threat of ongoing harassment or criminal action, a student ought to remain in school while the criminal process plays out." He has previously called for more oversight of the student conduct process in comments to the Inlander.

On Twitter, Baumgartner said this had nothing to do with football.

"This is not about getting Robert Barber back on the field," he wrote. "It's about getting him back in the classroom, and fixing broken [student conduct board] for everyone."

Diaz, from the Seattle area and in his second year at WSU, plans on transferring to another school.
"I definitely want to pursue my education," Diaz says. "I need to get my degree. I came here for a degree."