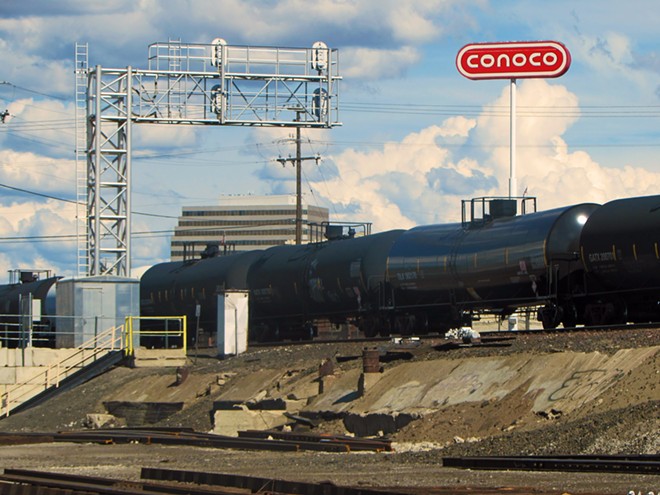 Daniel Walters photo
An oil train passes the Browne's Addition neighborhood near on Sept. 4
Earlier this year, the Spokane city council almost put an initiative on the ballot to oil and uncovered coal trains coming through Spokane. In fact, the vote to do so was unanimous, despite the city council's own policy advisor reminding them they were on very shaky legal ground.

It's become an issue during this election, with county commissioner candidate Josh Kerns slamming his opponent, Councilwoman Candace Mumm, in one mailer by claiming she had “knowingly supported policies in direct conflict with federal law.”

But upon further legal review, most of the city council, including Mumm, reversed course, removing the initiative from the ballot. Only Councilmembers Breean Beggs and Lori Kinnear voted to keep it on.

And ever since then, behind the scenes, Beggs and Kinnear have been working to find a way to resurrect some form of regulation to address oil trains.

"We met with the railroads to see if they were willing to support our proposed safety measures. They weren't really willing to do that," Beggs says. "So then we worked on a new version of the ballot initiative."

They worked with Todd Eklof, a longtime opponent of oil trains, to develop a new initiative. It differed in two significant ways.

"The first big difference is it only apply to railroad car owners and doesn't apply to railroads," Beggs says. Railroad companies like BNSF Railway had objected to the original ordinance, noting that they can't choose to transport certain products because they don't like the type of material being transported. Second, it narrowed the initiative to focus on fitting the precedent set by a 2003 case where the 9th Circuit found that state and local governments can regulate certain types of railway actions under the  Federal Railroad Safety Act of 1970.

"We repackaged the ordinances to follow that to the letter,' Beggs says. He requested that BNSF Railway him tweak the language, but says the company didn't respond.

Instead of trying to convince their fellow council members to put it directly on the ballot, they handed it off to Eklof to gather signatures.

"Once we drafted it, we passed it off to the private sector to do something," Kinnear says. "The main thing was getting it before the voters. That’s what my goal was, to make sure the people could weigh on it."

However, citizen's initiatives first go through the city's hearing examiner to weigh in on if they're legal or not.

On Monday, City of Spokane Hearing Examiner Brian McGinn assessed the legality of the modified resolution. The result? Not good.

"The proposed initiative is preempted by federal law and therefore cannot be validly adopted," he concludes.

Not only that, but McGinn concluded the initiative was so flawed that there was nothing that could be done to fix it to make it legal without changing it entirely.

"The primary, operative provision of this initiative is precluded by federal law," McGinn wrote. "As a result, minor adjustments will not be effective to cure the legal shortcoming, in the Hearing Examiner's view."

McGinn's analysis relies on a little bit different case law than the council's policy advisor. Instead of dealing with the specifics of the Federal Railroad Safety Act, as Beggs did, McGinn focused on the Interstate Commerce Commission Termination Act, which gives most authority to regulate railways to a federal board.

“When local agencies have enacted similar enforcement provisions, the courts have not hesitated to conclude that such remedial measures constitute direct regulation of and that such regulations are preempted under the ICCTA,” McGinn writes. “Local governments cannot enact an ordinance or regulation that dictates the location of railroad operations ... However, this is what the proposed initiative effectively does, along with issuing penalties for noncompliance.”

The choice to use the ICCTA instead of the FRSA frustrated Beggs. He didn't feel that McGinn thoroughly explained why.

"I thought the legal analysis we were going to see was, 'You've got two different congressional laws, how do you choose which one applies?'" Beggs says. He argues that, if McGinn's analysis had held sway, the example from California — which allowed cities to put in place certain measures to attempt to reduce derailments but not others — would have been ruled illegal.

However, McGinn argued that the regulations being proposed were not actually the sort of safety regulations the Federal Railroad Safety Act governs, despite serious concerns about safety driving them. They weren't, for example, specifically requiring track maintenance or specific equipment or training. Instead, he says they were zoning measures, the sort local governments were precluded from under the federal law.

McGinn noted the sort of large-scale consequence that an initiative such as Spokane's would set across the nation.

“If the City of Spokane could adopt local land use codes restricting the transportation of specific types of commodities, then every other municipality would be free to do the same," he writes. "Such circumstances would not result in the uniformity that was intended when the railroads were deregulated under federal law."

Ultimately, McGinn concluded that "there is no exception to federal preemption based on an activity being 'inherently dangerous' or 'ultra-hazardous.'"

But ultimately, McGinn's opinion only carries the weight of his opinion. His objection won't stop the initiative from moving forward.

"It's just advisory," Beggs says. "What it's designed to do is to give the — who often don't have a lawyer — give them some legal feedback, so they then have the right to change their language to adapt to it."

So Eklof has every right to go forward, despite the warning the initiative would almost certainly lose in court. Ekflof has until July 4 to get enough signatures to put it on the ballot.


Hearing Examiner on Oil Train ordinance by DanielWalters on Scribd

Cubs, country music, election polls and other headlines to start your day

A whole slew of holiday albums just hit, but it's not Christmas yet!