A whole slew of holiday albums just hit, but it's not Christmas yet!

While there aren't any Thanksgiving songs to speak of, wouldn't it be best to hold off on Christmas music until the end of November?
It's beginning to look like Christmas ... and it's not even Thanksgiving. That's right, even before we were dressing up as heroes and monsters on Halloween Monday, new Christmas albums had already been launched to the masses. Along with that, many local stores have their Christmas decorations out and holiday ads are attempting to make our seasons bright.

Now I am not a Grinch, my heart is not two sizes too small, I just don't understand why Christmas can't be celebrated after Thanksgiving is over. Just like there are some who believe that their birthday is worthy of a month-long ordeal, Christmas has slowly but surely become a two-month-plus celebration — and it's out of control.

Christmas music itself is not an evil thing. As we wrote in an article last year, new Christmas music can bring joy to many and we shouldn't always have to stick to the classic canon of songs. But of all the below artists working to cash in on the Christmas music craze, will any offer a bonafide hit?

Here's a look at the albums already available for purchase:
click to enlarge 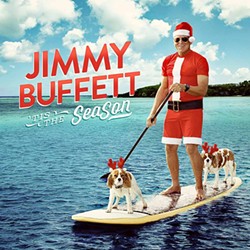 Certainly, many of these CDs generate curiosity and fans of the artists will most likely take a listen. How high the quality is here is anyone's guess.

Don't worry, as hard as this yuletide push can be to handle, in two weeks' time stores will most likely have the Valentine's Day candy out.

Finally, we leave you with this gem (the sleigh bells add the perfect touch):