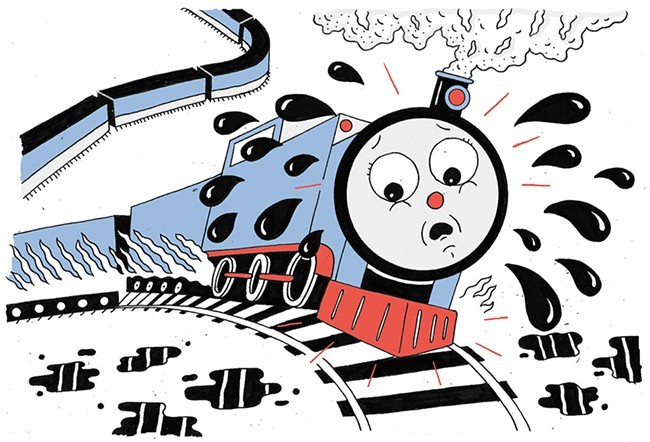 Caleb Walsh illustration
A train carrying crude oil derailed and caught fire outside of a small town in Oregon last week. A week later, elected officials and activists from communities along the same rail line are calling for state and federal officials to halt the traffic of all oil trains.

Speaking on teleconference call, Arlene Burns — mayor of Mosier, the town near the Columbia River where the derailment occurred — was joined by Spokane City Council President Ben Stuckart and other elected officials from nearby Hood River, the Dalles and the Warm Springs Tribe to ask both governors of Oregon and Washington as well as the U.S. Department of Transportation and the Obama administration to place a moratorium on trains carrying crude oil.

“We need to stand together because what happened here could have happened anywhere along the rail,” said Stuckart during the call.

In recent years, the number of trains carrying oil from the Bakken region of North Dakota to refineries in western Washington has risen. This increase in trains carrying Bakken oil, which is particularly volatile, has raised concerns that one could derail and explode in a populated area.

During the call, Burns said that communities along the rail line were being at “incredible risk” for the benefit of a few people who live far away. The derailment caused smoke to billow into the air, spurred an evacuation of the town, contaminated soil and threatened the town’s drinking water. Burns said that the spilled oil had ruined the town’s sewage system.

Spokane is the largest urban center these trains pass through on their journey, and Stuckart has been particularly outspoken on the issue. He noted during the call that the train that derailed in Mosier passed through Spokane earlier that day. Stuckart said that City Hall is within the blast radius of an explosion from a derailed train, and he worries that city elected officials would be unable able to respond to the emergency.

So far, Oregon Gov. Kate Brown and much of the state’s congressional delegation has called for a temporary halt to oil trains. When asked what happens if state and federal officials didn’t grant a moratorium, Stuckart responded that he and other members of Spokane City Council are working on a ballot measure that would criminalize Bakken oil within city limits. He acknowledged that it would likely be subject to a legal challenge.

“The health of our citizens is paramount and just because someone says there is some legal reason [we can’t pass it] doesn't mean that we shouldn’t be making every effort,” said Stuckart.

Arthur Grunbaum, an activist with Friends of Grays Harbor and Citizens for a Clean Harbor, expressed concern during the call over a proposed oil-by-rail terminal in Vancouver, Washington, that would likely increase the number of trains.

When asked about a proposal from state Sen. Michael Baumgartner, R-Spokane, to build a pipeline that would transport the oil across Washington, Stuckart said that one of the problems with Bakken crude oil is that doesn’t require any stabilization before being transported.

“As for the logistics of getting the right of way, I’m not sure how that would work,” said Stuckart.

Carina Miller, a council representative from the Warm Springs Tribe, called attention to how her tribe has fishing rights along the Columbia River that have been long been enshrined in a treaty with the federal government. During the call, Miller said her tribe, at this time, wasn’t considering using its treaty rights to legally challenge or halt oil train traffic, not unlike how the Lummi Nation used its treaty rights to stop a coal terminal outside of Bellingham.

Miller noted that an oil spill in the Columbia River from a train derailment is especially disturbing for the tribe, which uses the river for more than just fishing.

“This is a historical cultural piece of who we are,” she said.

Just how secret should Spokane's secret closed-door meetings be?

THIS WEEKEND IN MUSIC: Elkfest, Cascadia Festival pre-party and Lush in Space