President of nation's largest teachers union: "We have every reason to fear" Trump 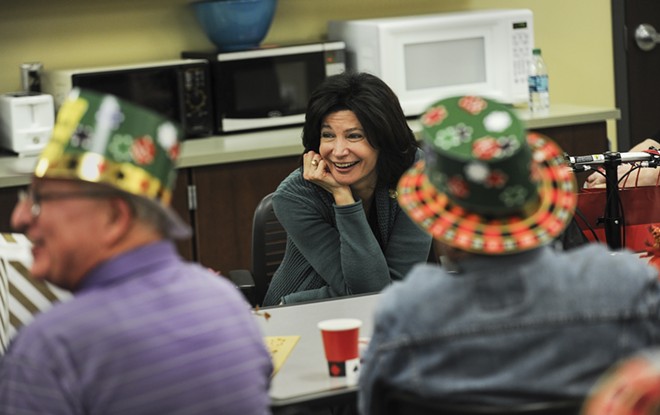 The NEA is the nation's largest teachers union. Garcia, a former Utah teacher of the year, has been NEA president since 2014. She came to Spokane Wednesday for an event at Rogers that honored cafeteria workers who call themselves the "Lunch Bunch." By the end of the school day, seemingly half the Rogers students were cheering the Lunch Bunch on as the workers stepped into giant limousine.

I caught up with Garcia while this was going on and asked her some questions about national and local education issues. She weighed in on the charter school debate, what makes Roger High School special, and why she's fearful of what a Donald Trump presidency will mean for public education.

Read some of the highlights from the conversation below. The Inlander  edited her responses for length.

Inlander: So this is your first time in Spokane?
It is! I actually went to Queen Anne High School in Seattle, so I know Washington. But I've never actually been to Spokane.

This school happens to be the school that an [education support professional] named Debby Chandler works at. Debby Chandler works here in the office, and she was elected nationally to be the president of the council of ESPs. So you have a national leader at this school, and she brags about this school all the time. She brags that, you know, five years or so ago, the graduation rate at Rogers was 47 percent, and last year it was 84 percent.

Do you see Rogers as being one of the models for how a school can turn it around?
Absolutely. We do consider what's happening here a model for the nation.

And how are they doing this? It's not a product that this district bought. It's not more test prep. It really is giving people the time to feel like they're family ... what they've discovered here, the magic — the secret sauce — is, you know, we can actually just do stuff that we want to, like this pep rally. Let's get everybody in the hall and let's clap for these people that are never recognized, the lunch ladies, and let's get a limo. The kids loved that. They loved planning it. They loved deciding who was gonna be recognized. And when it comes from — it sounds like a cliche — when it comes from the roots, when it comes from the community, then there's joy to it. You're not doing it because someone told you to.

There's been a battle in this state over charter schools. Do you think there is a way for charter schools to work?
That is such a good question ... I mean, that is the question.

I'll give you a good example: In Milwaukee right now, three of our members, teachers who were English language learners as students and they're teaching in inner-city Milwaukee, a very poor Latino community. And they said, you know, we see our school system treating the English language learner kids coming in the way we were treated, like we had a disability, like there was something wrong with us that we spoke Spanish as our major language. They said "we want to try something totally different." And they started the ALBA School, the Academy of Language and Fine Arts.

It's part of the Milwaukee public school system. It's not some for-profit chain, and everything is wrapped around culture, literature, poetry, art, music, dance, food. How do we get the parents involved? You still have your ABC's, you still have your times tables, but it's bilingual and they wrap it around Latino culture.

How different is that than a for-profit franchise charter chain that's copyrighted so they're not inviting anybody to come in and learn from them? Or some little charter that basically said, "We are the charter school of excellence and we only accept excellent students who pass our test."

And so you have to constantly ask yourself, if these are your limited public schools dollars, where is the best place to put them? We believe it's in a school like Rogers. We believe it's in the services and supports that these kids need. You could open up a charter school across the street, but the question would be, at what expense to Rogers High School?

Have you had a chance to learn about any of the charter schools in Spokane?
No.

There's two — one in this neighborhood. In Spokane, there hasn't been too many issues so far, but is your point that some of these issues are inevitable if charters keep popping up?
Let's take New Orleans. In New Orleans, what they did is, in the black neighborhoods, they have no public schools left. None. And that was by design. When Katrina hit, it hit everybody's schools ... They rebuilt and modernized all the white suburb public schools. They ended up better than before and they bulldozed the public schools in the black neighborhoods. And then they just said 'Alright, come one come all, open up charter schools and let's see how you do.' And a lot of them have done very poorly.

One of the questions that I think everyone is having after the election is what Trump's presidency is going to mean for education. What's your take? What are you anticipating?
We could not be more disappointed. We have every reason to fear the decisions that may come out of this administration. But to answer specifics: Who knows the next words that are gonna come out of his mouth?

Here's what we know from candidate Trump, that we acknowledge — now that we're seeing the way things are playing out — [what was said in the campaign] may have absolutely nothing to do with what his administration will do. What candidate Trump said was highly alarming. Candidate Trump, if he talked about education at all — I think he spent in the last year about 17 minutes talking about education, it was just not there. But the sentence or two that he gave it was that we needed to take $20 billion that's already in the department ... we take the money that's already there and we give it to block grants for vouchers. Vouchers are funding of private schools. So we take public school money, and we fund private schools with it.

Ask yourself: what are the premiere federal education programs? Special education. English language learners. Title I schools for high-poverty schools — they get special funding to meet the needs of some of the poorest of the poor kids. Student loans ... we are worried to death that he is about to dismantle special education, Title I schools and funding for English language learners, based on what candidate Trump said.

At this point, we don't know. We just don't know. We're alarmed, we want details, and what we know in our hearts is that what works isn't a little silver bullet. It's not a bumper sticker that says "let's fund market competition." So, we still can't let that stop us from wanting to make things better. And that means the real decisions that have a chance at helping kids are not gonna come from this administration. They'll come from the state level, it'll come from the school-district level. But more and more, if we follow the trends that really seem to be pointing the way, it'll actually come at the school building level.

What's the best-case scenario from a Trump presidency?
We'll be here a long, long time answering that question. We have heard nothing that gives us any confidence. Nothing. And so now we have to take our case to state and local and even building-community levels to say, "No matter what hits us, what will we do tomorrow to make sure our students get what they deserve?"

This post has been updated since it was originally published.