Daniel Walters graph
Last year's Chinese Lantern Festival at Riverfront Park was such a smashing success that the Parks Department decided to follow it up by doing the same event — with a new slew of Chinese lanterns — this year.

But the sequel couldn't quite capture the box office magic of the original.

But despite lower ticket prices — $15 for adults instead of $17 — attendance fell by 42 percent this year, according city records.

You could point to a few different possible reasons for the lower attendance.

First, Riverfront Park finally began its long-awaited $64 million rehab this summer, meaning large areas of the park were closed off.


Second, the dreary rain of October was a real bummer.

Daniel Walters graph
The parks department anticipates breaking even when taking into account the extra labor costs associated with the Chinese Lantern Festival
"You know, the rain was really tough," says Parks Spokeswoman Fianna Dickson. "It was tough for a lot of events going on outdoors in October. "

Third, there's the number of calendar days: In 2015, the festival was extended by two weeks. That didn't happen this year.

However, the city of Spokane doesn't pay the company that puts on the event, Sichuan Tianyu, for the Chinese Lantern Festival. It simply provides the space, and then provides Spokane with a chunk of the revenue. 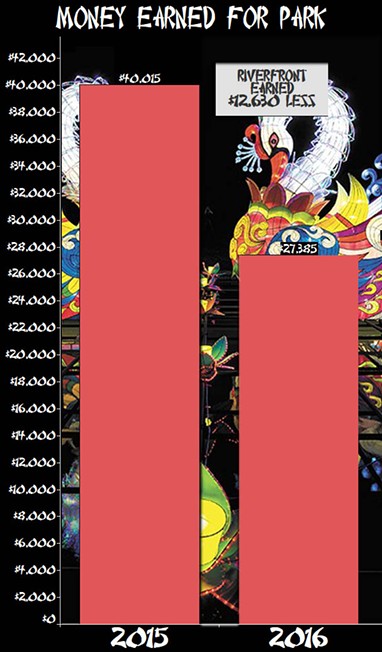 Taking into account the labor costs associated with the event, Dickson estimates the parks department will break even.

"We don’t anticipate making money off of this," Dickson says.

Instead, she says the the goal of the Parks Department is to facilitate bringing cool, interesting events to the community. Despite the lower attendance, Dickson says the feedback has been overwhelmingly positive. She says the parks department is interested in bringing the event back in the future — though probably not next year.

"I don’t know next year we’ll be able to offer the footprint [necessary] because of construction," Dickson says. "It’s, of course, something we hope will find a home in the new park."

A lot of that, of course, will depend on the Chinese Lantern Festival company, Tianyu. They're the ones that set the ticket prices and select the sites.

Gonzaga scores big in a Bulldogs vs. Bulldogs matchup