Courtesy of Courtney McKinnie
It's impossible to capture 19 years of life in a single article, even in 4,300 words. As a journalist, I pick and chose moments that can, ideally, give the most accurate picture of a person. Inevitably, some of the most powerful details are left out.

Such is the case with this week's cover story about Isaiah Wall — the 19-year-old from Coeur d'Alene who was pressured into buying drugs for the Idaho State Police. Eleven days after he started working as a confidential informant, Isaiah was found dead of a single gunshot wound to the head.

You should read the entire article, but then come back and read a little more of what didn't make it into the story — a fuller picture of a young man who loved and was loved, who took care of those he cared about before himself, and who, though at times struggled with depression, had begun to look forward.

The police are looking for Marcus Wall. Isaiah's dad has cycled in and out of prison throughout his entire life, which put a strain on the family. Courtney McKinnie, Isaiah's mom, did her best to provide for her three kids. Isaiah, it appears, tried to help out as best he could.

Below are the conversations Isaiah had with his father before Marcus Wall's felony arrest in February and with McKinnie via text afterward. Marcus Wall is identified as "Big Poppa," in Isaiah's phone:

Big Poppa: "How u doing child??? Just wanted to say I love you and miss you"

Big Poppa: "I know we'll hook up with weekend and hang out"

Isaiah: "Yesss for sure! I'm realllly gunna miss you when you're gone"

Isaiah: "Ughh I'm sorry. I just feel like whenever I get a close connection with you you go away. I hate it. I just want you to be over all this bullshit!"

Big Poppa: "I know I've been dealing with this shit since you were in mom's belly so I think it's time I stop paying for something I did almost 20 years ago."

Isaiah: "Yeah I know I feel like me and you have had very bad luck in our lives" 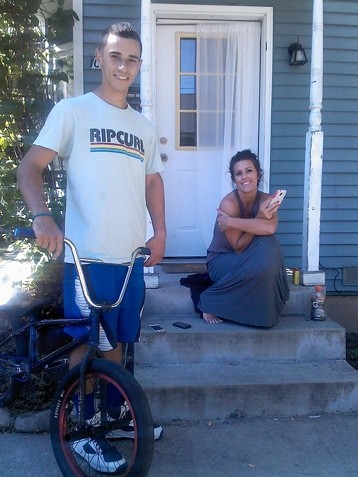 In early February, Marcus Wall turns himself into the police. Isaiah is devastated. He texts with his mom about it:

Courtney: "You're a rock. I absolutely love you with all my blood bone and marrow. Are you ok? Do you need anything?"

Isaiah: "I need him in my life mom. I'm going to go crazy without him again"

Courtney: "I know. I know. My heart is breaking for that reason. And Isaac needs you"

Isaiah: "Yeah I understand that. I need to be a role model but I feel like I've already kinda f—-ed that up. I do need to start hanging out with him more. It has been on my heart a lot"

Courtney: "I know this, if God is tuggin on your heart strings ... obey. There's abundance and blessing waiting there. I love your heart. Love your soul"

Isaiah: "I love you too mom"


May 1, 2016, weeks before Isaiah is called to Idaho State Police headquarters, he's texting with Aimée Grossglauser, a former girlfriend with whom he's remained close. She starts by asking him about his new apartment:

Aimée: "Are you stoked? ... Would you like to chat though for a little or are you busy?"

Isaiah: "Yeah I'm pretty excited. It'd be nice having my own house. And I'm not busy just figured you were haha"

Isaiah: "Yup it's a three bedroom house with a two car garage and a huge yard. It will be very nice"

Aimée: Ahh very cool! Why are you moving?"

Isaiah: "I need my own space. It's super hard not having my own room and shit"

Aimée: "That makes sense :) are you still working construction or?"

Below are three separate exchanges between Isaiah and "Josh," a contact who evidence suggests is an Idaho State Police detective, and who directed Isaiah's informant work.

May 24, 2016: Isaiah and Josh are talking about the second of three controlled drug buys Isaiah will end up doing:

Josh: "Lazy drug dealers. Did sky say how much he had when he hit you up last night?"

Isaiah: "I know and no I haven't talked to him since last night"


Minutes later, "Sky" responds. The deal is for five and a half grams of meth.

Josh: Perfect let's go. Head to my office. Is he at the same place as last time?"

Isaiah: "He wants to meet at Albertsons"


Isaiah sets up another controlled drug buy with the same person for the following day. Here, his text conversation with "Josh" — who appears to be his contact at the Idaho State Police — begins at 11:51 am on May 25. Isaiah tells Josh it's all set up, but first, he needs some gas.

Isaiah: "Oz and he said it'd be another hour or two," Isaiah responds indicating the dealer has an ounce of meth to sell. "And it'll be $700 for it.. Cool?"

Isaiah: "OK." Later he adds: "Shit I was thinking about this yesterday but I almost ran outta gas yesterday coming back. I may have enough to get there but we'd definitely need to get gas before this"

Josh: "Get it done. I already bought you a full tank and then some."

Isaiah: "He wants to me to go to his girlfriend's"

Several minutes later: Isaiah: "None of my friends or family will loan me money right now. So I'm putting $3 in cuz that's all I have and if i don't put at least $5 more dollars in I will run outta gas on this deal, I'm tell you that now. If you can spot me $5 for gas everything will go smoothly."


Finally, the day before Isaiah's death, he tells the ISP detective that he's got another bust set up — only this time the target is a close friend. Josh appears to get his confidential informants confused:

Isaiah: "Got an oz set up with Joe for Monday"

Josh: "Nice work. Make it wed an add a ball of brown please."


Josh doesn't respond until nearly 1 am on May 29, about four hours before Isaiah is found dead:

Josh: "Oh my bad. Got our dudes mixed up. Ok. Great work, that's very good. Still tell him the money is on wed so be ready then."


In conversations with those who knew Isaiah best, several words continually pop up: selfless, confident, loyal. He protected those who couldn't stand up for themselves, his friends say. He was goofy, and a natural athlete.
click to enlarge

"He had an insane vertical," Isaiah's friends Chris Anderson and Ricky Robinson agree. He would regularly school the two of them in 2-on-1 basketball. He listened to Tupac and Skizzy Mars. One of his favorite TV shows was The Office. And his favorite football team was the Philadelphia Eagles. They're playing the Seahawks this Sunday. He had planned to go to the game with his little bro.

From a bustling coffee shop in downtown Coeur d'Alene, Grossglauser, Isaiah's former girlfriend, sums him up:

"If I had to break it all down, it all trickles to this," she says. "He was love. Like he showed everybody that. We all have our faults. We're human, but there's so much behind that kid. It was always about love in the little ways. Showing generosity for this person in this moment or whatever. He loved everybody."

Poets: Last chance to submit your verses for our upcoming poetry issue!