Bill would require prosecutors to fess up to confidential informant deals 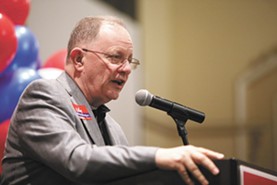 Sen. Mike Padden
The "single greatest cause of wrongful convictions" in death penalty cases, according to supporters of a bill sponsored by Sen Mike Padden (R-Spokane Valley)?

Courtroom testimony from confidential informants and other witnesses promised something in return for their statements.

The bill (SB 5038) requires prosecutors to hand over to criminal defendants information about witnesses who've been incentivized to testify — either through leniency for crimes or money. The bill passed out of the Senate Law and Justice Committee unanimously.

Specifically, prosecutors must reveal informant witnesses' criminal history, including pending charges, all benefits informants have received or will receive in exchange for their testimony and details about the "substance, time and place" supporting informants' statements, among others.

In essence, the bill would codify what is known as the Brady rule, which stems from a 1963 U.S. Supreme Court case, as it applies to informant testimony. The rule requires prosecutors to provide criminal defendants with all evidence that could point to their innocence or that could discredit state witnesses.

Currently, what qualifies as exculpatory or impeachment evidence is left up to individual prosecutors, which can lead to inconsistencies.

"We're finding that this judgment about what should be turned over and what shouldn't varies across the state," says Lara Zarowsky, director of the Legislative Advocacy Clinic at the University of Washington School of Law. "We feel strongly that that decision-making process needs to be removed entirely, so this bill lays out specific information that must be turned over." Zarowsky helped lead a team of students in crafting the bill and testified in favor of it earlier this month.

Local defense attorneys agree that informant testimony is an issue. They say the bill is a step in the right but should go a step further.

"What we really need for snitch testimony is some form of corroboration," says Spokane attorney Josh Maurer. "This type of testimony can be so damning. It is almost always believed by the jury regardless of if they are informed of the benefits the informant is receiving."

The bill also lists possible penalties if prosecutors don't comply, which could include barring the informant from testifying, dismissing the case and/or sanctioning prosecutors.

Currently, people accused or convicted of crimes who are looking to pass their liability onto someone else are able to "game the system," those who support the bill argue. Without a law requiring prosecutors ensure their witnesses' reliability, defense attorneys are often left without crucial information.

The Washington Association of Prosecuting Attorneys argues that the original bill's definition of an informant was too broad and should be limited to jailhouse informants "directed by the prosecution to gather information, and given a plea bargain" or those "paid or used to gather intelligence for the police."

Zarowsky notes that this bill is a dramatic step back from another informant bill UW students worked on last year. That bill would have required judges to verify an informant's reliability, but didn't get far in the legislature.

Other states, such as North Dakota, are considering legislation that police interaction with informants, rather than how informants are handled in the courtroom.