The ups and downs of the leadership of the Northwest Museum of Arts and Culture have been well documented, from the firing of its former executive director Forrest Rodgers nearly a year ago, to its hiring of an interim director who happened to be married to a then-board member — and was a former U.S. ambassador to boot. 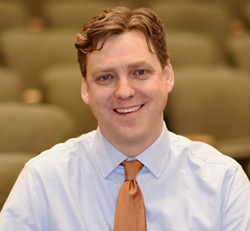 Jessup's background includes working with a Native American corporation in his home state of Alaska to develop a cultural center in the Bering Straits region, working with tribal leaders from 20 communities there. In a press release announcing his hiring, Jessup said that experience has him excited about working with the MAC's extensive collection of Native American artifacts.

"I look forward to working with local tribal leaders and the museum staff to ensure that this world-class collection of of more than 22,000 artifacts, photographs and documents from the Plateau Indian tribes continues to not only be preserved, but also utilized to educate people about this region's rich Native American culture," Jessup said.

The new hire has also worked at the Guggenheim Museum in New York City, the Pasadena Museum of California Art and, most recently, as the director of the Longmont Museum and Cultural Center in Colorado, where he led a $4.6 million fundraising campaign for a new auditorium, and developed programs and exhibits that more than doubled the museum's attendance, according to the MAC's statement.

Jessup received his M.A. in Art History and Museum Studies at City University of New York, attended the Getty Museum Leadership Institute, where he received his Arts Management Certificate.

Bill would require prosecutors to fess up to confidential informant deals

Halloween 2019: Tricks, treats and fun for all ages at these local events

REVIEW: Les Misérables is a classic for a reason…