The college football bowl bids are in, the NFL is barreling toward the playoffs and the Zags are already looking scary before the WCC season starts. Let's get caught up with the regional sports scene.

EWU Athletics
Gage Gubrud set a school record with 47 completed passes against Central Arkansas.
THE EAGS INTO THE QUARTERFINALS
Eastern Washington won its first game of this year's FCS playoffs on Saturday, taking down Central Arkansas 31-14 after falling behind early. Quarterback Gage Gubrud threw and ran for more than 500 yards of total offense, all-world wide receiver Cooper Kupp tallied a couple of touchdowns and the team is on to the quarterfinals this Saturday for a showdown against the Richmond Spiders in Cheney.
The Big Takeaway: The Eags enjoy home-field advantage through the semi-final round if they keep winning. If there's anything for fans to worry about, it's those slow starts of recent games.
What to say to your Eags-fan friends today: "Hey, the temperature's going to get up to 32 on Saturday! What time we tailgating?"

BOWL ACTION ABOUNDS
With Washington rolling to the Pac-12 championship by beating down Colorado on Friday night, the Huskies earned a spot in the Final Four of college football. They will play No. 1-ranked Alabama on New Year's Eve in the Chik-Fil-A Peach Bowl. So — good luck with that, Huskies.

Washington State, despite to two losses to end what had been an impressive run through the Pac-12 schedule, earned a trip to the Holiday Bowl in San Diego to play Minnesota. While the opponent isn't very sexy, San Diego is a lot nicer place to visit that El Paso for the Sun Bowl. The game is on Dec. 27.

Idaho beat Georgia State Saturday in Moscow 37-12, taking advantage of turnovers and delivering the Vandals' best season in years, earning a trip to the Idaho Famous Potatoes Bowl in Boise on Dec. 22, where they will face off against Colorado State.

The Big Bowl Takeaways: The Huskies help the Pac-12 get a little respect by making it into the College Football Playoff, the Cougs get to go to a nice, warm-weather city to play a Big Ten opponent, and Idaho gets essentially a home game for their first bowl in nearly a decade. Hard to complain about any of that. 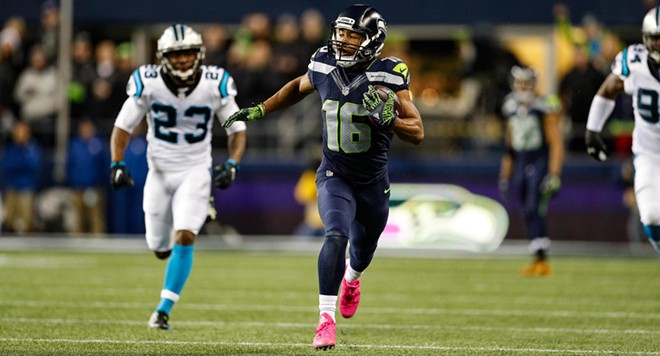 Seahawks.com
Tyler Lockett took one to the house on an end-around Sunday night.
DON'T CRY FOR CAROLINA
The Panthers had a little roll going against the Seahawks, with Cam Newton and Co. winning their last two games against Seattle, including last year's playoff showdown in Charlotte. Sunday night, it wasn't even close as the Seahawks ran over Carolina's vaunted defense, threw the ball efficiently and held the Panthers offense to basically one big play. The final score was 40-7, and the game was pretty much a good dream for Seahawks fans except for one big, disastrous turn of events — the loss of Earl Thomas to broken leg; he'll be out for the rest of the regular season.
The Big Takeaway: The Seahawks offense might be finally getting on a serious roll, just in time for the playoffs. The loss of Thomas on defense might make scoring lots of points an imperative from here on out.
What to say to your Seahawks-fan friends today: "Man, I hope Earl is back for the playoffs."

Gonzaga center Przemek Karnowski was a beast against Arizona on Saturday.
ZAGS' BIG WEEKEND
You wouldn't necessarily call Arizona a monkey on Gonzaga's back, but the teams do have a storied history that in recent years leaned the Wildcats way in the western teams' showdowns. On Saturday in Los Angeles, the 8th-ranked Zags got the best of No. 16 and injury-riddled Arizona 69-62, with Przemek Karnowski having his best game so far this season, dropping 18 points and a lot of tasty assists. The Zags play UW in The Kennel on Wednesday.
The Big Takeaway: The Zags now have wins against San Diego State, Florida, Iowa State and Arizona — all of which should look good to the NCAA selection committee when it comes time to seed the March Madness tourney.