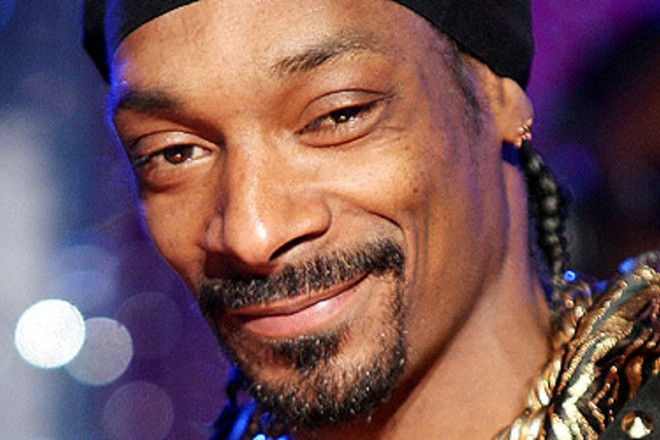 Snoop Dogg plans to stop in north Spokane while traveling through Washington on his Puff Puff Pass Tour.
Go ahead and drop it like it's hot — the one and only Snoop Dogg comes to Spokane Wednesday and you'll want to celebrate. Indeed, the famed rapper (and weed aficionado) plans to stop at Royal's Cannabis shop for a meet-and-greet photo session ahead of his Tri-Cities show that evening.

Jane Marlow, manager of the marijuana shop, says her business was only contacted last week about the possibility of Snoop Dogg coming through. His management was referred to Royal's over other local marijuana dispensaries, she says.

"We were so surprised, but we're all really excited now that it's confirmed," Marlow says. "We've been working day and night to be ready for tomorrow."

And the breakdown for Snoop's stop looks like this:
— Snoop should arrive by noon and plans to be on hand for fan photos at least until 1 pm.
— Photos with Snoop are free and open to anyone 21 and over, but Royal's is asking people to donate at least one pair of socks for their sock drive, which benefits Blessings Under the Bridge charity.
— Snoop is not giving autographs or selling marijuana, people will take photos with Snoop and then be asked to exit the building. The goal is to get as many fans in to see the rapper as possible.

Snoop's PR team issued an email today saying that the rapper loves doing these appearances and giving back to the cannabis community on many of his tour stops. Along with his recent Puff Puff Pass Tour, Snoop has recently been making merry with Martha Stewart on their new VH1 cooking show Martha & Snoop's Potluck Dinner Party. You should catch up on episodes while waiting in line tomorrow to see the musician/TV personality in the flesh.

On December 9, give back to the community with $10 Schweitzer tickets