What We've Been... Drinking


Welcome back to the Inlander staff's biweekly rundown of cool things we've been watching, reading, listening to, drinking, eating, looking forward to, etc. Before you get any further, we should point out that "drinking," as you'll discover, does not strictly include beverages of the alcoholic nature, despite what stereotypical notions about journalists you may have. Enjoy!

In between bites of breakfast (typically a hardboiled egg and a piece of fruit), I guzzle about four cups of coffee, black and piping hot. I don’t function without it, but that’s not interesting or unique, especially in this line of work. Perhaps my newfound fascination with La Croix, the hoity toity, fizzy drink popular with suburban moms and Paleo dieters, is not unusual for journalists, either, but it is what I’m drinking right now. Seriously, like right this very second, I’m sipping from a can of apricot-flavored sparkling water. Why do I like sparkling water? 'Cause I want flavor, but no sugar. And that little bite you get from the carbonation is just enough of a fix for this former two-a-day Coke drinker.

Apparently, I’m not alone. Seltzer water sales, and La Croix specifically, have been on the rise since the early 2000s, according to the International Bottled Water Association. The gallons of domestically produced sparkling water increased by 58 percent between 2010 and 2014. Also, there are even T-shirts for the uber La Croix obsessed. The only downside is that La Croix can be a bit more expensive than other seltzer waters. Around here, Target is the most reasonably priced. Otherwise, Safeway’s Refreshe line does just fine. (MITCH RYALS) 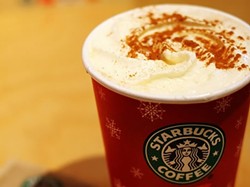 I’m a tea drinker, but there’s one drink I have to imbibe in every Christmas season — an eggnog latte from Starbucks. This beverage is eggy and noggy and when I sip this from that red holiday cup I want to wallow in its depths. The drink isn’t new to the Starbucks holiday lineup by any means, but it seems the most overlooked. In hushed tones, coffee drinkers speak of pumpkin spice lattes or the peppermint mocha, but friends, those beverages are too sickly sweet in comparison to this hearty drink. Some local coffee shops refuse to offer eggnog infusions, as they believe it “ruins” the pureness of their coffee. Pure baloney. The eggnog latte is a treat of the highest order (and calorie count), which a person should make a point to order at least once every December. (LAURA JOHNSON)

MIMOSAS
Post-election, I was on a tequila kick. Not that I was surprised by the results, they just made me want to get way drunker than I usually have any interest in being. Any kind of sunrise — cheap tequila shots and a lemon — you name it, I drank it. Since then, things having calmed down a bit and I've turned to a quieter drink, one expressing only the subtlest of desperation: mimosas. In particular, I've enjoyed Garageland's grapefruit mimosa and Bruncheonette's pomegranate-infused version. When I'm at home, I stick with whatever the cheapest Prosecco is, an extra-pulp orange juice, and a handful of raspberries muddled in the plastic cup I use instead of a glass. I've got to get through the rest of 2016 somehow, don't I? (HAYLEE MILLIKAN)

I confess I don't make it out to Total Wine or other specialty beer/wine markets that often. Thankfully, my neighborhood Rosauers keeps its coolers well stocked with a variety of sudsy goodness. Recently, I noticed a small stand of six-packs featuring a brewery I'd yet to come across. Salt Lake City-based Uinta Brewing's (seriously check out their sleek website) seasonal brews have made their way north, and I've been grabbing its Punk'n and Rise & Pine whenever I can. The autumnal Punk'n is one of the best pumpkin-infused brews I've had; the only thing better is Elysian's Night Owl (which can be impossible to find unless you're stocking up in, like, September).
At only 4 percent ABV and 23.6 IBUs, this lighter yet warm brew is not as heavy as many of its pumpkin cousins. Punk'n also won a 2010 silver medal at the World Beer Championships.

Next up in the seasonal rotation is Uinta's new Rise & Pine, a "hoppy, dark ale" brewed with juniper and pine-forward hops. Unlike the Punk'n, this toasty beverage checks in at 7.5 percent ABV and 85 IBUs. I've lately seen this version on shelves more often than the pumpkin; Rise & Pine is an appropriate transition as we settle in for what looks to be a long, snowy winter. (CHEY SCOTT) 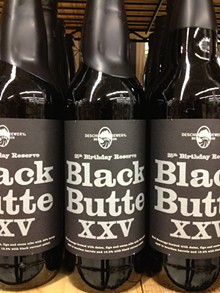 Craft beer is a passion of mine, so it’s no surprise that my go-to winter warmer is a hard-hitting imperial porter or stout. As a winter baby, it’s become a birthday tradition to crack open a bomber of Deschutes’ Black Butte birthday reserve — a barrel-aged version of their flagship porter weighing in at around 11 percent ABV. Although a summer release, it’s the perfect winter beverage. I was treated a bit early this year when Black Butte XXV, the 2013 vintage of the imperial porter, appeared on the tap list at The Flying Goat during dinner last night. Brewed with Theo Chocolate’s cocoa nibs, Mission figs, Medjool dates and sour wort addition, the quarter-century celebration beer is layered with flavors of dried fruit, oak and vanilla. The always-changing malt beverage has included chilies, cranberries, figs and other experimental ingredients in past variations. I’ve yet to try it, but this year’s Black Butte XXVIII is sure to be another delicious addition to the collection. This time around, it’s brewed with cocoa, vanilla beans, sweet orange peel and 50 percent is aged for 12 months in bourbon and scotch barrels. You can also find it on various shelves around town — I grabbed mine at Huckleberry’s Natural Market. (DEREK HARRISON)