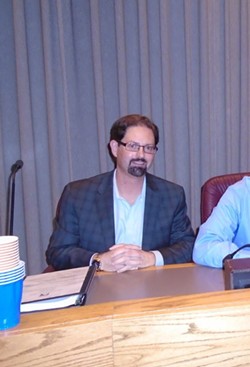 Bruner's proud of the commission's work over the six years he served, but in a phone call conversation with the Inlander this expressed frustration with many of the complaints the ethics commission dealt with.

"There are valid complaints where someone is a concerned citizen and believes there’s an ethics violation. But those are in the minority," Bruner says. "There are other less virtuous reasons the majority of complaints are filed. They are often motivated by an attempt to get attention or to grandstand, or to use the Ethics Commission as a feeder to get public notice."

Sometimes, he says, the complaints come from "eccentric individuals," like anti-government types who believe the entire government is corrupt.

"We have a few complaints that appear to be from mentally unstable individuals, that ramble on and on about conspiracy theories [about] little mistakes," Bruner says.

In the future, Bruner suggests that the commission given the ability to quickly dismiss unreasonable complaints, in the same way that a judge has the right to bring a case to a quick close with a "summary judgment" ruling.

"Meaning that if a complaint comes before us that really has been settled upon in some other way, it’s redundant, or otherwise lacks merit, we should be able to dismiss it without any further action," Bruner says. "Because it’s a waste of time, quite frankly."

Bruner declines to name specific complaints he was frustrated with, but refers, in general, to some of the complaints against the mayor.

"Many of the complaints against Condon were redundant," Bruner says. "They alleged the same concerns about him. We had already dismissed virtually identical complaints."

In his time on the commission, Bruner was among the most vocally skeptical about the National Organization for Women's complaint against Condon, which centered on Condon's response of "no" when the Inlander asked in 2015 if any sexual harassment complaints had been lodged against the former police chief. Reporters later uncovered that a former police spokeswoman had personally alleged to Condon and several members of his administration that she'd been sexual harassed — but declined to officially fill out a report.

In a letter he sent to the Inlander last month, Bruner appeared to accept Condon's argument that Condon's answer to a subsequent question served as a clarification that Condon was only referring to official filings of complaints.

Bruner also noted how challenging it was to rule on an issue when key figures — including City Administrator Theresa Sanders, who was on a vacation in Europe — were not available to testify. He doubts the commission "would have delivered a finding against the mayor."

But we'll never know for sure. Ultimately, of course, due to a last-minute deal between Mayor David Condon and NOW, the complaint was pulled.

Bruner was irritated by the sudden reversal.

"I was puzzled and disappointed. I was puzzled because I wondered, after the labor and arguments and filing of motions, what could have possibly led them to quite
their complaint," Bruner says. "I was disappointed because our commission seemed to be developing some consensus. We had put a tremendous amount of time and energy — unpaid — into this effort that came to nothing."

Ultimately, part of the deal between NOW and the mayor called on the mayor to review the ethics commission process itself.

"It doesn’t have to be a process where you have to lawyer up to file a claim," NOW attorney Rick Eichstaedt told the Inlander last year. "If you’re somebody like the mayor and you're the subject of a frivolous claim, you also [shouldn't] have to lawyer up."

In a sense, Bruner echoes how complicated and messy some complaints can become.

"One insight I've had is the commission really is a quasi-legal body. We do have the power to issue subpoenas," Bruner says. "It can easily take on the feeling of a courtroom. I think it was spooky for some of the members who had no experience with the legal system."

Still, Bruner is glad the commission isn't just filled with lawyers or politicians.

"We don’t want just professionals," he says. "As long as someone has a background in ethics, they can be on the commission."

Ultimately, he doesn't see it as a problem that some parties feel the need to hire an attorney to represent them through the process.

"If it is complex and someone’s reputation is at stake, there should be counsel," Bruner says.

But he also says the commission would take into account if one side was represented by an attorney and the other wasn't. The underlying facts and evidence, he says, are given more weight than the words of an attorney.

Bruner does express general support for the consideration, raised as a possibility by City Council President Ben Stuckart, of hiring an independent "inspector general" to conduct investigations into complicated ethical matters. He also believes the idea of the voters electing the city attorney is worth exploring.

"The perception has been that [city attorneys] have been in collaboration with the mayor for controversial decisions," Bruner says. "The elected city attorney could be totally independent of that influence."

Reflections: Six years on the City of Spokane Ethics Commission

I was initially appointed by Mayor Verner and became Chairman under Mayor Condon. The primary role of the Ethics Commission is to respond to ethics complaints against any city employees subject to the code of ethics. We also gave advisory opinions about potential conflicts of interest. We handled complaints against a number of current and former politicians – Stuckart, Fagan, and Salvatori – as well as several unelected City employees.

Clearly the complaint against Mayor Condon by NOW was the most challenging in the history of the Ethics Commission. At first, it was one among many complaints about the Mayor. They all boiled down to four allegations: the delayed records release; the Mayor’s response to Chief Straub’s alleged harassment of Ms. Cotton; Ms. Cotton’s convenient transfer to the Parks Department, and the Mayor’s allegedly “dishonest” statements during the September 2015 press conference. We dealt with the NOW complaint for nine months. The other complaints were dismissed or withdrawn.

At one point I had to call for an executive session. This allowed us to meet privately and off-the-record. It was necessary because we had hundreds of pages of exhibits, declarations, motions, and counter-motions added to the complaint. It was a mess. And to make matters more complicated, three of the most critical parties were unable or unwilling to testify, including Monique Cotton, Chief Straub and Theresa Sanders. We could have issued subpoenas, but neither party requested that Cotton or Straub contribute and Theresa Sanders was on vacation in Europe.

At times it was a little surreal. It would be unorthodox or eccentric for an attorney to file a complaint on your behalf without your permission or the testimony of key witnesses. But this is analogous to the NOW complaint. NOW focused on matters related to Ms. Cotton, but she was never personally involved. NOW’s complaint seemed to imply they were acting on behalf of all women. NOW attorney Rick Eichstaedt did his homework and made some really good arguments, but so did James King, counsel for the Mayor.

But then, quite unexpectedly, nine months into the process, NOW withdrew its complaint. NOW never provided us with an explanation. All our time and effort seemed to be for nothing. On the other hand, we were relieved of a great burden.

What if the NOW complaint had gone forward? Honestly, I doubt we would have delivered a finding against the mayor. Little parts of the complaint had already been de facto dismissed leaving the sole issue of Mayor’s alleged dishonesty during the September 22, 2015 press conference; specifically, whether the Mayor was telling the truth when he indicated that there had been no official complaints filed against Straub.

By the time our Commission had reviewed all the evidence, the Superior Court had already dismissed the recall petition against the Mayor. There had been two independent investigations, but the reports did not assert or later retracted conclusions about the mayor’s culpability. Without sufficient witness testimony or other facts, the City Ethics Commission was left with an allegation, media reports, records, copious attorney filings, and anemic opinions.

Did the Mayor violate the code of ethics? At this time a better question might be, “Did the mayor exercise poor judgment?” Granted, in mid-early 2015 he was in a lose-lose scenario. Chief Straub was supposed to be the police department’s savior, but then allegations of misconduct began to surface. The alleged “victim,” Ms. Cotton, refused to file an official report per City procedures. What would you have done?

I did not vote for Mayor Condon, but I think he is a good man who wants the best for Spokane. Certainly not every wise person would have made the same decisions he did. In politically sensitive situations it can be extremely difficult to be ethical and strategic at the same time. I think that Mayor Condon tried to do both, but a win-win scenario was just not possible.

I understand public sentiment. It’s natural to feel disturbed when we hear about the City government embroiled with complaints, lawsuits, and allegations of deception or a cover-up. I’m sure many citizens had visceral reactions like, “Someone must be guilty!” or “City government must be corrupt!” But as Commission members, we could not make automatic assumptions. Justice requires calm deliberation, attention to detail and impartiality. Without doubt, every member of the Ethics Commission during my time lived up to that standard.