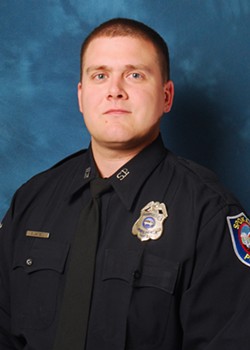 Jamieson, a nine year veteran of the force, was the only officer to fire his service weapon in the early morning hours of Jan. 15.
Although all the details of the incident have not yet been released, Spokane Police have said Dumarce flashed a knife and led Jamieson and other officers on a foot chase through the lower South Hill.

Multiple officers fired Tasers in an attempt to stop Dumarce, but they were ineffective, police said. Jamieson reportedly fired when Dumarce ran toward a vehicle stopped at a red light, police said.

Dumarce was pronounced dead at the scene after an EMT-certified officer gave medical aid. In a press conference hours after the shooting, Spokane Police Chief Craig Meidl emphasized that Jamieson stopped Dumarce while patrolling in a "hot spot" — an area where police focus their resources in an attempt to reduce the relatively high level of crime.

At this point, it is not known why, specifically, Jamieson initially stopped Dumarce.

The Spokane Investigative Regional Response Team (SIRRT) is investigating the shooting, with the Spokane County Sheriff's Office as the lead agency.

Jamieson was one of the original volunteers for crisis intervention training (CIT) before the de-escalation training became mandatory for all of its members. The mandate was a stipulation of a lawsuit stemming from the officer involved beating death of a mentally disabled janitor, Otto Zehm.

Jamieson is also a verbal defense and influence instructor, according to SPD and is a range safety officer and a defensive tactics instructor. He received the Chief's Citation Award in 2014.

Costco to pay millions in settlement over prescription drugs