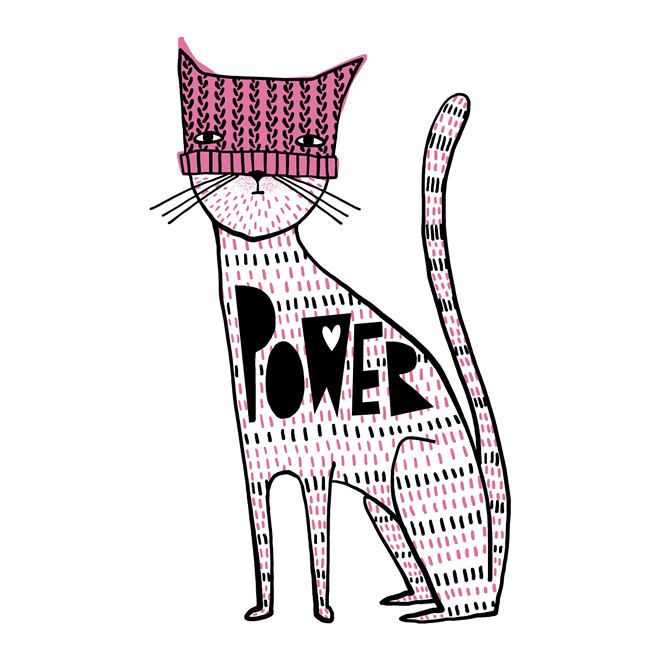 Cori Dantini
After separate campaigns featuring this design to support Planned Parenthood and the ACLU, artist Cori Dantini is raising money for a local group.
As the weather gets warmer with the arrival (finally!) of spring, opportunities to comfortably wear those pink, cat-ear beanies are going to become fewer for supporters of the Trump-era women's movement.

But thanks to a project by local artist Cori Dantini, feminists of all stripes can spread their message of support in the form of a tasteful T-shirt design by the Pullman artist, who's selling them via the online fundraiser platform Booster to raise money for national and local social-service nonprofits. 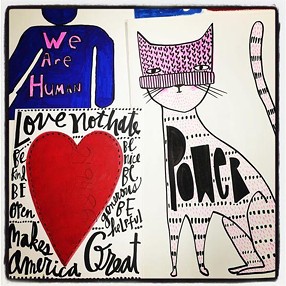 Dantini's T-shirt design came from this art she made for a Women's March sign.
Dantini launched her first "cat POWER" campaign in late January, selling T-shirts with an original design she first doodled on a sign she carried in that month's Women's March. People loved her stylized drawing of a striped cat wearing a pink "pussy hat" pulled down over its eyes like a ski-mask, and with the word "power" emblazoned across its furry chest.

"People said they would wear it on a T-shirt, and I was like 'OK, I'm going to see what I can sort out,'" Dantini says.

Booster made the process easy for the busy artist, handling the product procurement, printing, shipping and payout to her chosen benefactor,  Planned Parenthood Federation of America. Supporters were able to choose from a variety of shirt colors and styles for men and women. By the campaign's end, more than 360 shirts sold, raising a total of $5,640.

"I think everyone I know used Planned Parenthood, and I did as my main doctor from when I left home to when I was about 27, because I couldn't afford insurance. So I hold that near and dear to my heart," the artist says. "They do important, good work for everyone."

Simultaneously, and following Trump's original executive order to temporarily ban U.S. entry to residents from seven Muslim-majority nations, Dantini launched a second campaign with the design, this time printed on solid black tees, to support the work of the American Civil Liberties Union. That effort brought in just over $1,000.

As a full-time professional artist who designs prints for fabric, and who also sells her own lines of greeting cards and prints on Etsy, this is the first time Dantini has used her art to fundraise for a cause. Doing so has been a cathartic way for her to support causes that are at the top of her mind since President Trump took office. 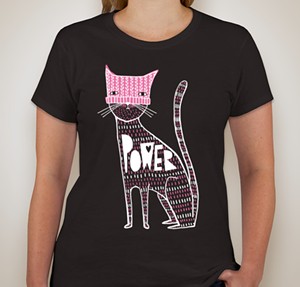 Two separate campaigns give ATVP supporters a wide selection of T-shirt colors and styles.
Once the first two campaigns wrapped and friends and acquaintances saw the finished product in person, Dantini decided to launch a third campaign, this time picking a local organization: Alternatives to Violence of the Palouse (ATVP), which aides victims of domestic, sexual and individual violence.

The more tees Dantini sells, the greater the donation per shirt will be for the organization (at set benchmarks of items sold, Booster offers a bigger sales cut to the beneficiary). Two separate "catPOWER" campaigns supporting the local nonprofit allow supporters to choose from a white or gray tee, (this one ends on March 17) or a variety of styles in solid black (ending on March 28.)

Soon, Dantini plans to launch a fourth campaign with a new version of her "power pussy" art, featuring a close-up of just the hat-wearing kitty's face with the phrase "Purr-sist," a cute and catchy reference to the new women's movement rally cry, "Nevertheless, she persisted."