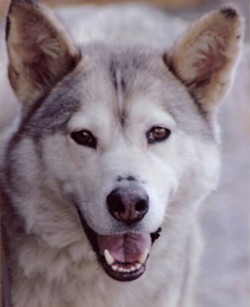 Courtesy of Rob Repin
Kaisa
Kaisa was not supposed to wake up. The grey and white Alaskan malamute was diagnosed with cancer, and veterinarians gave her only months to live. Her owner, Rob Repin, made the difficult decision to have her put down.

What was supposed to be a peaceful goodbye to Kaisa, Repin's sole companion for the past 11 years, quickly turned into a torturous ordeal. Nearly five years later, it's not over.

Repin sued Washington State University and Washington state in a case that raises issues never before considered in courts throughout the country, according to a Washington State Court of Appeals commissioner's ruling. Repin, a reclusive gold prospector who lives in a 420-square-foot cabin that he built himself, is asking for compensation for the emotional distress caused by his dog's botched euthanasia.

If successful, his lawsuit could break new legal ground for pet owners in Washington. His claim focuses on the debate between the role of a pet. Was Kaisa "just a dog?" A piece of Repin's property? Or was she, as Repin describes, his family?

In 2012, Repin traveled from his home near Cle Elum to WSU's Veterinary Teaching Hospital. It was in Pullman that Repin decided euthanize his dog.
Repin sat with Kaisa on the "quiet room" floor as a veterinarian and a vet student prepared to inject the drugs. "I felt a duty to hear her last heartbeat," Repin says. "She was sound asleep."

Before the injection, however, Repin says he heard the vet student, Jasmine Feist, point out damage to Kaisa's catheter, where the drugs would be injected. Feist asked her supervisor, Margaret Cohn-Urbach, if she should replace it with a new one.

"No. I will show you how to still make this one work," Cohn-Urbach said, according to Repin. Feist and Cohn-Urbach dispute whether this conversation happened.

The cocktail of drugs that were injected were supposed to sedate the 90-pound malamute and then stop her heart. However, soon after the second drug was injected, she awoke and began screaming and thrashing, Repin says.

"She was screaming and struggling to get out of that room and lash out at anything she could get at," Repin tells the Inlander. "I went from her best friend to 'what the f—k are you doing to me?'"

Repin says he restrained Kaisa while the two vets stood frozen against the wall wondering what to do. Eventually, one ran to get more drugs. She returned after several minutes and injected them. Within 15 seconds, Repin says, Kaisa was dead.

The Washington State Court of appeals recently upheld a trial court's decision to dismiss much of Repin's lawsuit — barring him from receiving compensation for the emotional distress of holding his dog as she writhed and screamed in pain. The rulings affirm that currently Washingtonians are not entitled to compensation for emotional distress stemming from veterinary negligence or malpractice, as they would be with human medical malpractice.

But Chief Justice George B. Fearing, who wrote the 41-page opinion, also wrote a separate opinion asking the state Supreme Court to review the case and, in a rare move, advocating a "change in the law."

Fearing began his concurring opinion by quoting from a famous speech by former U.S. Sen. George Vest in a case from 1870:

"Gentlemen of the jury: The best friend a man has in this world may turn against him and become his enemy. His son or daughter that he has reared with loving care may prove ungrateful. Those who are nearest and dearest to us, those whom we trust with out happiness and our good name, may become traitors to their faith. The money that a man has he may lose. It flies away from him perhaps when he needs it most. A man's reputation may be sacrificed in a moment of ill-considered action. The people who are prone to fall on their knees to do us honor when success is with us, may be the first to throw the stones of malice when failure settles its cloud upon our heads. The one absolutely unselfish friend that a man can have in this selfish world, the one that never deserts him, the one that never proves ungrateful or treacherous, is his dog."

"I am bound by earlier Washington Supreme Court and Court of Appeals decisions to affirm denial to Robert Repin of emotional distress damages, but I recommend our state Supreme Court's consideration of our ruling," Fearing writes.

Two other appeals court justices wrote a third opinion countering Fearing. Allowing people to get paid for emotional distress "would likely put many veterinarians out of business, it would sharply increase veterinarian bills for pet owners, and it would result in veterinarians refusing to perform emergency operations."

A group of veterinary associations agreed in a separately filed brief, stating: "If pets do not receive care, including owner-present euthanasia, because lawsuits, they will suffer. Creating emotion-based liability in pet litigation is not the pro-pet position. Pets do not benefit from these awards, only owners do."

Adam Karp, the Bellingham-based attorney who is representing Repin, says the economic impact of a lawsuit on the veterinary industry is not something that should concern the court. He also cites a 2004 article in the Animal Law Review that refutes the notion that vet care would become too expensive if pet owners could receive compensation for emotional distress.

The article by Christopher Green, the executive director of Harvard's Animal Law and Policy Program, cites calculations from ABD Insurance, one of the largest veterinary insurers. The calculations show that each vet's annual premiums would rise by about $212. That increase translates to an average of less than 13 cents in vet care annually for each American pet owner.

Repin, who is unmarried and lives alone, says he and Kaisa were virtually inseparable for the past 12 years.

"I'm going to take this all the way to the Supreme Court, and hopefully they will allow me," Repin says. "I have to take this as far as I possibly can until we get a final ruling. I don't think the general public is aware that their pets are considered property. Just because emotions are based around an animal, they don't count? That's not right. That's not justice."