As House of Charity plans to cut hours, a call for Valley and county to step up with funding


People who are chronically homeless, and often most visible when they have nowhere to go during the day, could soon be back in downtown and other common areas, as House of Charity will have to shut down its daytime hours and extra sleeping space as of May 1. 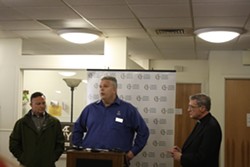 Samantha Wohlfeil photo
Rob McCann speaks during a press conference at House of Charity on Thursday.
was completely up and  running, with places for single people, families and children to go during the day, it became clear that the funding would quickly run out, says Rob McCann, president and CEO of Catholic Charities.

At least, that's the case for the House of Charity's expanded evening sleeping space that allowed an extra 200 people to sleep on the lower floor of the shelter since last November, and its daytime hours that started in January.

Before the lower floor was opened so more people could stay, House of Charity accepted only about 100 men per night to sleep upstairs. With the expanded space, women were allowed to stay for the first time, and HOC allowed people with pets as well. Significantly, the space was open every night all winter, where normally it was only open when the weather dipped into cold enough temperatures.

Since January, the shelter has been open during the day, so anyone can stay inside as they need.

But by February, it was clear that a boost of money from the city that allowed for those extra hours wouldn't be enough to keep things going after May, McCann said during a press conference Thursday morning.

So what's the issue?

Support from the city is great, he says, but Spokane Valley and Spokane County need to chip in, or the system will fail.

"We need the Valley and the county to step in and collaborate on this issue," McCann says from a podium set up next to a common dining area, which is packed with people who otherwise might be spending their morning on nearby sidewalks.

It takes about $125,000 a month to keep the various shelters that are part of the system running, McCann says, and to really run the shelters well without interruption, they'll need to become a permanent item in the budgets of local government agencies.

McCann says they've asked other agencies to chip in multiple times in the 15 years he's been there, each time when they've been on the verge of having to close, but never this intentionally before.

"We're putting a lot of money into streets and sidewalks, which is a good thing, because these folks are going to be sleeping on them on May 1st." — Rob McCann, president and CEO, Catholic Charities

"This is the last time we're going to do it. We're not going to keep riding this roller coaster, you know, if there's not the taxpayer and voter will, if there's not the will of the elected officials to take care of this population, we're gonna find out right now, and if that's the case, there's not the will, then we'll accept that as the community's response," McCann tells the Inlander after the room has started to clear out. "I don't think that's gonna happen. I think Spokane's better than that."

While there might be some logic to having a 24/7 shelter system in the winter and loosening hours when the weather is warmer, the shelter doesn't share that opinion, McCann says, as they don't think it's good for the dignity of the people they help, and it makes staffing a nightmare.

"I certainly can't keep hiring and laying off staff every six months. We're going to lay off 15 people in May," he says. "That's a $100,000 unemployment liability that Catholic Charities now owns."

"The city's desire as a substantial funder of the 24/7 pilot was to attract other funding partners. Unfortunately, that did not materialize." — Brian Coddington, spokesman for the city of Spokane

House of Charity is unique in that they accept people regardless of if they are sober or not.

"We take anyone, in any condition," McCann says. "The only other place in town that can say that is the jail."

So where are those folks going to stay now? Where will the 40 to 50 women per night who have been sleeping there go?

"We're putting a lot of money into streets and sidewalks, which is a good thing, because these folks are going to be sleeping on them on May first," McCann says.

Catholic Charities wants to continue running the shelter, he says, and with the total cost of that and the other shelters in Spokane running about $1.5 million a year, if Spokane, Spokane Valley, and Spokane County put 0.1 percent of their annual budgets toward the shelter system, it would be fully funded.

"This needs to be a fixed, permanent line item, not something we fight for every year," McCann says.

While House of Charity will stop offering its daytime hours and go back to serving just men at night, Open Doors family shelter, run by Family Promise, has enough money to stay open through the end of the year, according to Joe Ader, Open Doors director.

Because Open Doors only takes families, they don't expect to be impacted by the closure of the extra space for singles.

However, having a place for people to be during the day is an important part of getting them help, Ader says.

"When people think about homelessness, they just think about sleeping, about night shelter, and it's really during the waking hours where you can get the most time with people in need to help them get back on their feet," Ader says. "If you're actually looking for outcomes, the daytime's a pretty critical component."

Spokane Mayor David Condon issued a statement on the closure Thursday morning pointing out the other spaces that will stay open, and pointing to city plans to take proposals for shelter service.

"Shelter services remain in place for men, families, women and youth at the Union Gospel Mission, Salvation Army, Family Promise, Hope House and Crosswalk," Condon says in the statement. "The city will seek proposals from agencies to replace the single-adult component of the 24-hour emergency housing system."

The 24/7 shelter model was run as a pilot this year, expanding on the usual winter warming services (shelter space that's only open when it's cold enough), and the city is putting together a request for proposals to offer the 24/7 service again in the winter, writes Brian Coddington, spokesman for the city, in an email.

"The city's desire as a substantial funder of the 24/7 pilot was to attract other funding partners," Coddington writes. "Unfortunately, that did not materialize."

Meetings are being scheduled with Spokane Valley and the county, he says.

To date, Coddington writes, the city has committed $898,324 for the pilot program capital and operations, broken down as follows:

— $503,029 to House of Charity, including funds for facility improvements and for additional day and night sheltering capacity for households without children 4/30/17.

Testing future doctors, running risks and getting a boost from meatless protein

A rogue bulldozer, a big bomb, exploding rocket fuel and other morning headlines