NEWS: With about a third of students categorized as something other than "white," Spokane public school students are more diverse than the rest of the very, very white city (86 percent according to the census), which matches national trends.
click to enlarge 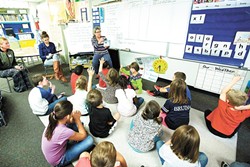 MUSIC: Trombone Shorty is bringing the sounds of New Orleans to Spokane this August, and tickets are on sale now.

NEWS: Spokane Mayor David Condon appointed former U.S. Attorney Michael Ormsby as the city's attorney, which, for now, appears to have stopped the call to make that an elected position in its tracks.

What in the health?
Have no idea what's going on with the latest health care proposal and possible repeal of the Affordable Care Act? The Washington Post threw together a quick Q&A.

Suit filed in CdA drowning death
Relatives of Reggie Nault, who drowned on Lake Coeur d'Alene in 2015, filed a wrongful death lawsuit against teens who were with him in the boat at the time, and adults who allegedly gave them alcohol before the incident, the Coeur d'Alene Press reports.

Shop around for an MRI, avoid foodborne illness, and get some free vitamin D